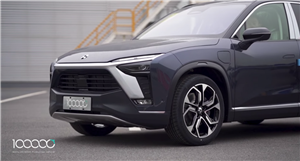 Shanghai-based electric car maker Nio, often considered as the Tesla of China, has reached a big milestone with the production of its 100,000th vehicle on April 7. All of those cars are electric, of course.

The milestone was reached 1,046 days after Nio’s flagship ES8 SUV started series production. The landmark car – the latest ES8 – rolled off the production line at the JAC-NIO manufacturing centre in Hefei, in China’s Anhui province. Customers of the first-generation ES8, ES6 and EC6 joined staff to celebrate the occasion.

The EV specialist is growing fast. It was only in July 2020 that Nio celebrated the production of its 50,000th vehicle. Less than nine months later, that figure has doubled.

Nio’s next product will be its first sedan, the sleek-looking ET7. Unveiled in January, the ET7 is over five metres long and has a clean design with a sweeping roofline. It has a dual-motor setup – the front one is rated at 245 PS and the rear gets a 408 PS unit. Max output is a claimed 653 PS and 850 Nm of torque, good for 0-100 km/h in 3.9 seconds. Four-piston Brembo brakes provide stopping power.

The battery pack located on the vehicle floor comes in several configurations, starting with a 70 kWh unit that provides over 500 km of range, followed by a 100 kWh unit for over 700 km. Nio’s 150 kWh battery pack will only be offered in late 2022, offering over 1,000 km of range on the NEDC cycle. More on the ET7 here.