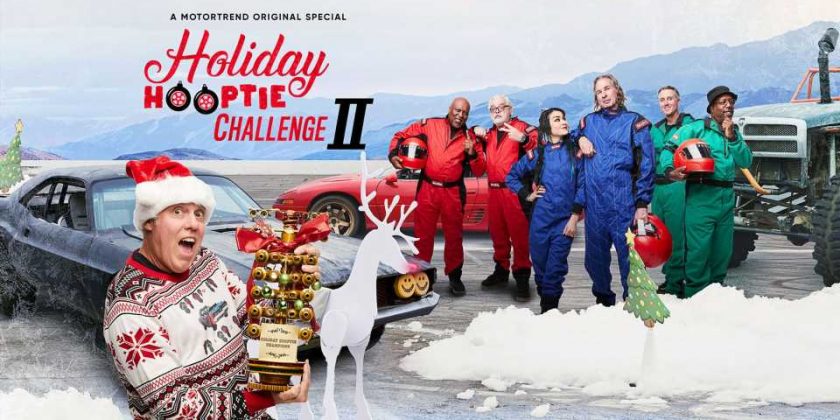 The festive scene is set in Irwindale, California, where David Freiburger is back hosting your favorite kind of holiday special—with questionable cars competing for glory—the second edition of the Holiday Hooptie Challenge! Some of your favorite MotorTrend hosts and vehicles are ready to team up and race some hoopties purely for Freiburger’s entertainment (yours, too). Ugly sweaters, mud pits, drifting, and burnouts—what more could you ask for in a holiday special that’s fun for the whole family?!

Hooptie racing has evolved in the few short years since David Freiburger created the genre, and so has the Holiday Hooptie Challenge for its second running. There are still multiple events, your favorite MotorTrend+ vehicles are still gonna get a thrashing, but for 2021 we’ve brought in some Hooptie World Championship flavor. All the holiday action goes down on Friday, November 26, 2021, on MotorTrend+!

What the Heck Is the Holiday Hooptie Challenge?!

For 2021, the Holiday Hooptie Challenge has evolved. Last year, we had six hosts in six vehicles, all going at it head to head in multiple events. In the holiday spirit of union and camaraderie, this year your six MotorTrend hosts will be pairing up! They’ll also be using only one vehicle, each, out of the MotorTrend fleet for all three events.

This year, the Holiday Hooptie Challenge will integrate more types of motorsport, as well. In 2020, it was all off-road, but this year the Challenge begins at Irwindale Speedway. The first two events will take place on the infield of Irwindale’s half-mile paved oval: The Drift Wrap and the Tire Sleigh. Freiburger will be awarding style points and penalties for each event, so hooptie racers better bring their A-game. Winners of each event will also receive an advantage for the third event.

As was allowed during the Hooptie World Championship, the teams of MotorTrend hosts will have a day to wrench on their vehicles before going to the final event at Glen Helen Raceway: Dirty Santa’s Short Course. This is going to be an all out endurance race, complete with a driver change, and done at the best time for holiday off-road racing—at night! Who will manage to survive (or impress) David Freiburger the most?

You know Lucky Costa from HOT ROD Garage and Kevin Hart’s Muscle Car Crew and Eric Malone from Fastest Cars in the Dirty South and the Roadkill Nights 2021 Hellcat Grudge Race. Lucky can wrench on anything, often fixing the things his co-host on HOT ROD Garage—Tony Angelo—breaks. On Kevin Hart’s Muscle Car Crew, he gave the Plastic Cup Boyz some pointers on their journey to legit-car-crew-status and customized each of their vehicles, too.

Eric Malone, leader of Team 256 hailing from Muscle Shoals, Alabama, is one of the Dirty South’s most prolific street racers. He and Team 256 build some of the fastest eighth-mile street cars around and Eric is no slouch behind the wheel. Both hosts have proven themselves capable hooptie drivers in past MotorTrend+ shows, but will the HOT ROD Garage Mitsubishi 3000GT be enough car to get them through Dirty Santa’s Short Course?

You’ve read KJ Jones’ work for years in Diesel Power and on TruckTrend.com and FourWheeler.com. KJ was also Freiburger’s co-host for the Hooptie World Championship, and you know Dave Chappelle from Dirt Every Day. KJ is an old-school drag racer and knows what it takes to put vehicles through their paces as the organizer of Diesel Power Challenge for many years, but his experience with hooptie racing has been from the other side of the commentators booth up to this point.

“Dirt Head” Dave Chappelle co-hosts Dirt Every Day with Fred Williams and is often the voice of reason when it comes to building some of their crazy off-roaders. The expert fabricator can turn any wheeled vehicle into a capable rock-crawler, but will his trail driving and navigating skills pay dividends in the Holiday Hooptie Challenge? At least he can coach KJ through the finer points of driving the “Rock Viper,” having built it and wheeled it multiple times on Dirt Every Day.

Steve Dulcich is everywhere in the Roadkill Universe but mainly Roadkill Garage and Engine Masters, and Faye Hadley is the co-host of Motor MythBusters and All Girls Garage; they’re also the returning champs from the inaugural Holiday Hooptie Challenge. They both happen to be master mechanics, too, but with totally opposite styles. Steve Dulcich is Freiburger’s right-hand man when it comes to bodging things together just to get things running, and harvesting and reusing  junk most people might think is unusable from his personal horde.

Faye Hadley, the Toyota-certified technician, takes a more methodical approach. Trained as a dealer mechanic, broken and worn parts always get replaced with new or rebuilt, and every effort is taken to make the cars she services and restores as close to factory conditions as possible, or better. The differing styles have both proven successful in the past, so everyone else, watch out! With the Roadkill Garage “Off-Road” Challenger in their corner, this mechanically-minded duo is a force to be reckoned with!

Vehicles of the Holiday Hooptie Challenge

Built for the HOT ROD Garage $6,000 Supercar Coast to Coast Battle in episode 96, this ’91 Mitsubishi 3000GT is not what you expect to run on an off-road short course, although the all-wheel-drive should come in handy. For the Coast to Coast Battle, Lucky Costa bolted in some adjustable coilovers, an intercooler, better brake pads, meaty slicks on the rear tires, and an ECU with a fresh tune. This is a nice car that Tony has yet to break, but can it handle what David Freiburger has in store?

Yes, believe it or not this pile of tubes and suspension started out life as a heavy duty Dodge pickup truck, then Fred Williams and Dave turned it into a rock bouncer. For the uninitiated, rock bouncers are off-road vehicles built to literally be thrown at rocks at speed in the hopes that the big tires and beefy suspension will bounce the vehicle up and over the intended obstacle. They also have heavily reinforced (and artistically designed) rollcages for when that inevitably goes wrong. Why do they call it the “Rock Viper?” It’s V-10 engine is based on the V-10 in the Dodge Viper, which was based on a V-8 truck engine to begin with. Enough history, let’s see this thing drift already!

The Roadkill Garage “Off-Road” Challenger is a possible gun in this knife fight. Built by Dulcich and Freiburger entirely out of the junkyard, the Off-Road Challenger is perfectly set up for thrashing. The Mopar 360 V-8 and 727 Torqueflite transmission are solid and the limited slip 3.55 gears burn the knobby tires with the best of the Roadkill Universe fleet. It can jump, it can broadie, it even survived a sand storm; the Off-Road Challenger has stood up to more off-road abuse than many of its stablemates and survived, but will this be an unfair advantage for last year’s champions?

Which team will take home the 26-pound valve train and timing gear trophy? There’s only one way to find out: Watch the second edition of the Holiday Hooptie Challenge on Friday, November 26, 2021, on MotorTrend+.

GET ALL THE DETAILS HERE!

Already a subscriber and want to share the holiday magic with a MotorFriend? Give them the 1-Year MotorTrend+ Gift Subscription! You’ll also receive 3 entries in the Ultimate Holiday Sweepstakes, for a chance to win the Roadkill Bubble project car, and receive an additional entry for every $10 spent in the MotorTrend Store. Hurry! These holiday deals won’t last!