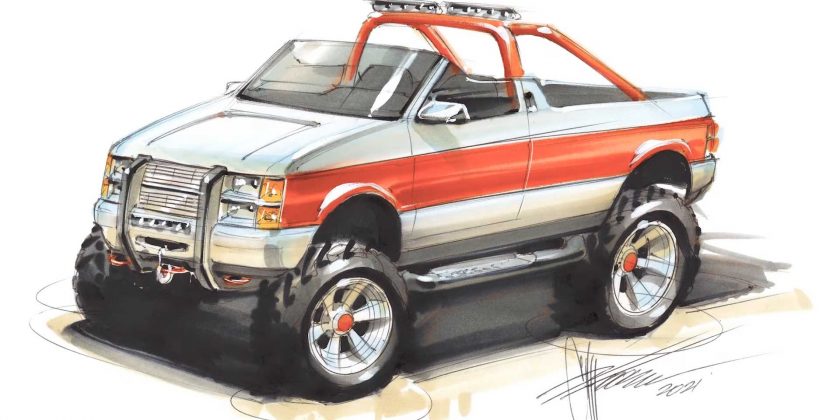 If Jeep jumped on the 1980’s minivan train, this would’ve been it.

Friends, it’s time for something a little different. By little, we actually mean spit-take crazy, but in the coolest way possible. Not only does this new Chip Foose sketch depict a roofless monster minivan, it depicts one with wood sides still shining like a beacon of salvation for all the unloved family machines of yesteryear.

Perhaps we’re going a tad overboard, but here’s the thing. Minivans forever altered the automotive landscape. It’s hard for anyone under age 30 to understand, but when Chrysler unveiled the oddly shaped, front-wheel-drive Caravan in 1984, the world went insane. Here was something that carried as many kids as a clunky station wagon but was smaller in size and easier to get into. It also looked pretty cool – not all minivans wore faux wood vinyl on the sides – and some Caravans even came with a turbocharged engine. Soon, every automaker had at least one minivan, and well, you know the story from there.

Yes, minivans eventually fell from grace but perhaps Foose can change that. Admittedly, a roofless Caravan might be an issue in locations that aren’t arid deserts. Riding on a lifted undercarriage makes it harder for the kids to climb inside, and once there, seating is restricted to just two buckets in the front. However, that’s offset by this custom Caravan’s all-terrain capability. And just think about the added safety at night with a bank of high-intensity lights on the rollbar.

We’ve seen a few Chip Foose sketch videos, and as awesome as this custom Caravan is, simply watching the artwork come to life is a treat unto itself. Foose traces out the wild minivan using a standard Caravan print as a starting point, so the dimensions are accurate. There’s no digital retouching on a computer; it’s all analog and frankly, the final product could be a warmed-over Pontiac Aztek and it would still be awesome.

That said, we’d take this custom Caravan over the wildest Aztek every day of the week.