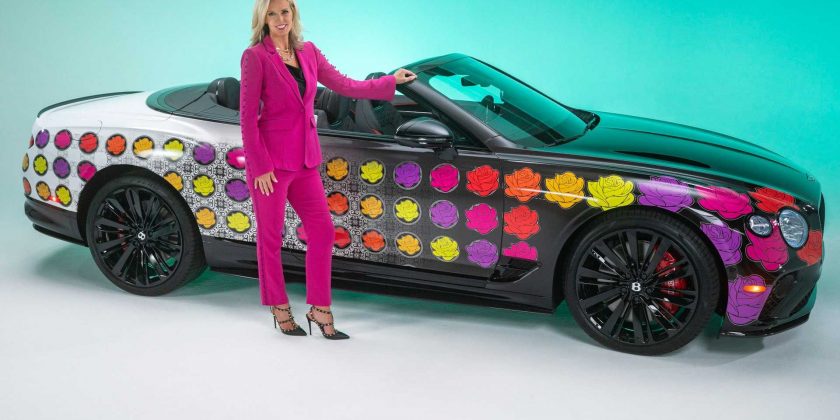 Bentley Continental GT Speed Convertible gets a special one-off that is going up for charity in 2023. The droptop’s wild appearance pays tribute to an American sports reporter Craig Sager who is famous for wearing suits in vivid colors and patterns. The money will benefit SagerStrong Foundation for supporting blood cancer research.

This unique look of this Continental GT Speed Convertible comes from Bentley’s Mulliner customization division. The base color of the body runs from black at the nose to white at the tail. The flanks have rows of flowers in various colors, and there’s a paisley pattern on the doors and rear fenders.

“Our interpretation of ‘clothing’ the Continental GT Speed Convertible in something Craig would have worn honors him and his vibrant, enduringly positive, and uplifting spirit,” said Scott Reynolds, retail marketing manager at Bentley.

The Continental GT Speed Convertible packs a 6.0-liter W12 twin-turbo engine. The powerplant makes 650 horsepower (478 kilowatts) and 664 pound-feet (900 Newton-meters) of torque. An eight-speed dual-clutch transmission routes the power to an all-wheel-drive system with an electronic rear differential. The vehicle also has all-wheel steering. This tech lets the model hit 60 miles per hour (96 kilometers per hour) in 3.6 seconds and achieve a top speed of 208 mph (335 kph).

“Craig had a deep-rooted passion for craftsmanship, it was reflected in the suits he had tailored and the cars he chose to drive. If he were here today, he would be driving the family around, top down, smiling ear to ear in this perfect representation of his beautiful and powerful spirit,” Stacy Sager said.

Bentley’s Mulliner division frequently releases special edition models to celebrate various events. For example, it recently showed off the Bentayga Equestrian Collection with embroidered horse heads on the seats. The group also made the Bentayga Speed Space Edition with moon-inspired styling for the dealer in Orlando, Florida.