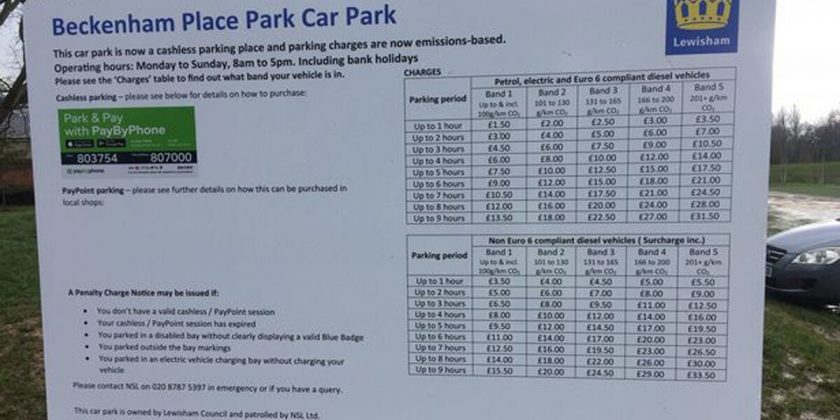 All the updates to parking fines explained in full in February

Many furious drivers have taken to social media to criticise the new parking changes, which charge drivers based on the emissions output of their vehicle. The parking charges are split up into bands which categorise which vehicles will have to pay based on how environmentally friendly their car is.

The maximum charge is £33.50 for those wanting to pay for up to nine hours, who have a non Euro 6 compliant diesel vehicle.

For Band 5 – which is all non Euro 6 compliant diesel vehicles which produce more than 201g/km of CO2 – one hour of parking will cost drivers £5.50.

All electric vehicles will benefit from this, as the price to stay for up to nine hours is £13.50, just £1 more expensive than it would be for a diesel car to park for three hours.

In total, diesel drivers are paying three times as much as those vehicles which are in the lowest bracket.

The charges, which have been introduced in Beckenham Place Park car park, charges drivers based on their emissions.

The car park is run by Lewisham Council, who have launched this new charging scheme as part of its Climate Emergency action plan, according to MyLondon.

Council bosses expect to bring it around £300,000 extra a year from the changes to short-stay parking for cars and vans.

Commenters on the CarTalkUK subreddit questioned the proposals, saying it would have a knock-on effect and may force some drivers off the road.

One commenter, audigex, said: “The theory, as presumably envisioned by a well-meaning, lower-middle-class team leader of some description, is reasonable enough – do small things to encourage cleaner vehicles.

“Save the world, one tiny change at a time.

“In practice, all of these ‘it’s more expensive to use a more polluting vehicle’ schemes are effectively just a tax on the poor, who don’t have much choice on what they drive.