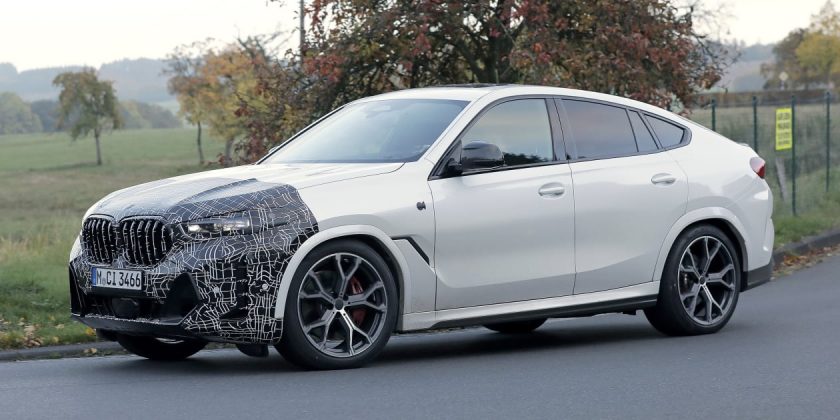 The original BMW X6 was a key car for the now crucial coupe-SUV market, and now the third-generation model is almost ready to receive its mid-life facelift. We spied it undergoing cold-weather testing earlier this year, but our latest spy images show the updated X6 is now testing on the road.

The revised X6 will gain a slightly redesigned exterior and new interior technology inspired by BMW’s most recent SUVs – namely the iX and XM. We’ve also seen a facelift version of the performance-focused X6 M testing already too, which should be unveiled at the same time as the regular X6.

At the front of this test car we can see a slimmer pair of headlights, which is in keeping with the i7 and XM, although there’s no secondary unit below. The redesigned bumper is almost fully uncamouflaged now and the lower grille has a new shape to it integrating the radar sensor. The side air intakes have also become larger.

We expect the updated X6 to arrive with new alloy wheel designs, although the new car is unchanged in profile, retaining the outgoing model’s diagonal front wing cutout, shallow glass house and tapering roofline. The rear end of this pre-production prototype is carried over, too, with the same vertical vents, two-tone lower bumper and rear lights, although these could be revised for the final production car.

Bigger changes are expected inside. BMW’s latest iDrive 8 infotainment system debuted on the iX electric SUV, and the tech is beginning to trickle down to the rest of the range.

The X6 will be the next adopter, with a redesigned dashboard to accommodate a single, curved display panel. This will comprise a 12.3-inch digital instrument panel and a 14.9-inch central touchscreen, which can also be operated using a rotary dial on the centre console. This itself will be redesigned, featuring a smaller gear selector.

Speaking of which, the new X6 is also likely to receive tweaks to its suspension setup to strike a better ride and handling balance, along with revised powertrain and gearbox calibrations. The facelifted model will retain the same eight-speed automatic gearbox as before, along with the existing line of engines.

The two diesel options will be 3.0-litre straight-six units, as will the entry level petrol model. The facelifted M50i is expected to use the same 4.4-litre turbocharged V8, and the X6M will be fitted with a more potent version of this engine producing well over 600bhp. Small tweaks to powertrain hardware and software could see improved performance and efficiency across the board.

With the current X6’s lifecycle expected to last until 2026, it could be the last X6 with an internal-combustion engine. BMW’s “Neue Klasse” EV platform is set to launch in 2025 underpinning the next 3 Series so we could potentially see an iX6 replace the current X6 in future

Check out the fastest SUVs in the world right now…