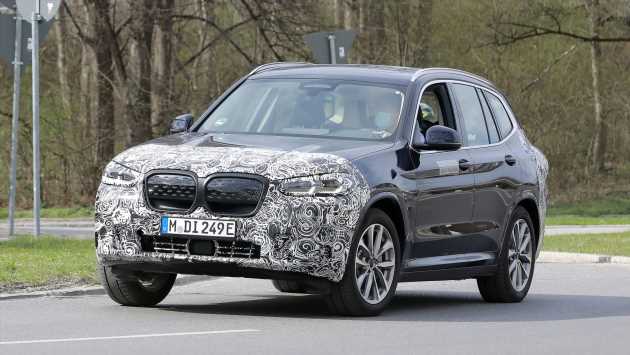 The iX3 will soon receive some minor styling tweaks, to keep its design consistent with its soon-to-be updated petrol-powered X3

Despite the car being on sale for less than a year, BMW is already planning a facelift for the electric iX3 SUV. It’ll coincide with the company’s update for the combustion-engined X3, which is expected to receive its mid-cycle refresh later this year.

While the move may seem a little counter-intuitive given the relative freshness of the current iX3, BMW says it sees the X3 range as a “family” which should be revised in its entirety, regardless of each model’s individual launch date.

This updated iX3 development mule features the usual facelift styling revisions. Up front, there’s a new bumper with a couple of extra vents ahead of the wheel arches, along with some new LED headlamps with a new daytime running light signature.

BMW could also remove some of the iX3’s distinguishing blue accents on the facelifted model. The current car’s side skirt trim and diffuser flaps have been ditched for this mule, with the rear bumper being swapped for an altogether smoother unit. The SUV’s tail lights are another new addition, with updated signatures to match the headlights.

Inside, we’re expecting precious few revisions. The infotainment setup on this mule appears to be the same as the current car’s, with BMW’s ubiquitous digital gauge cluster ahead of the driver and a 12.3-inch infotainment screen perched atop the dashboard. Updates will probably be limited to upholstery and trim revisions.

BMW shouldn’t fiddle with the standard iX3’s powertrain, either, as it already features the company’s latest EV drive system. The current car has a 282bhp electric motor mounted on the rear axle and an 80kWh battery pack, together they offer a 0–62mph time of 6.8 seconds and a claimed maximum range of 285 miles.

Buyers will also get the same support for 150kW DC rapid charging, which will allow the SUV to recover an 80 percent charge in around half an hour.

Now read all the news about BMW’s latest electric car, the i4 saloon…