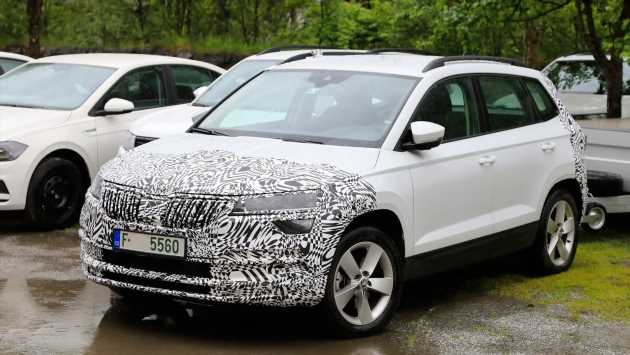 Skoda’s updated Karoq SUV will make its debut on the 30 November, sporting a range of styling and technology updates

Skoda has confirmed that the facelifted Karoq will be unveiled later this month. It’ll gain a handful of cosmetic and equipment tweaks designed to keep the SUV competitive with the Ford Kuga and the much newer third-generation Nissan Qashqai.

The Karoq has proved itself as Skoda’s most popular SUV and the firm’s second-best selling vehicle overall, just behind the Octavia, and Skoda is keen to maintain that momentum. Since production started in 2017, more than 500,000 examples have been sold worldwide.

Skoda hasn’t yet released any images of the updated Karoq, but our spy photographers have been keeping a watchful eye on its development programme. The design changes for the SUV follow the usual mid-cycle update trend.

A prototype was previously spotted with reshaped LED headlamps, a new front bumper and a slightly tweaked radiator grille, which nudges the Karoq’s styling into line with that of the newer Octavia. At the rear, there’s a reprofiled undertray and a subtly reworked tailgate spoiler – and buyers should be offered some fresh paint options and new alloy wheel designs.

Inside, we’re expecting a fresh leather-trimmed steering wheel, updated door cars and a choice of new upholstery finishes. Skoda’s upper mid-range SE L model will also likely be offered with the Volkswagen Group’s 10.25-inch digital instrument binnacle as standard, like the updated SEAT Ateca, with which it shares a chassis.

There’s also the potential for Skoda to introduce an iV-badged plug-in hybrid version of the Karoq with this update. It would likely use the same 1.4-litre four-cylinder petrol engine and electric motor combination from the new Skoda Octavia iV, which would provide an output of 201bhp and a maximum electric range of around 30 miles.

The rest of the Karoq’s line-up will be made up of the Volkswagen Group’s familiar blend of petrol and diesel engines, opening with a 113bhp 1.0-litre three-cylinder petrol and topping out with a 187bhp 2.0-litre four-cylinder petrol on the flagship Sportline model. In the middle of the range, there’ll be a choice of 2.0-litre diesels, along with a 148bhp 1.5-litre petrol.

Martin Jahn, Skoda’s board member for sales and marketing, said: “[The Karoq] was our most popular SUV model during the past year and the first half of 2021, which illustrates its importance within the model portfolio. I am convinced that we will build on this success story with the new edition of the Karoq and attract new customers to the brand.”

What do you make of the facelifted Skoda Karoq? Let us know in the comments section below…