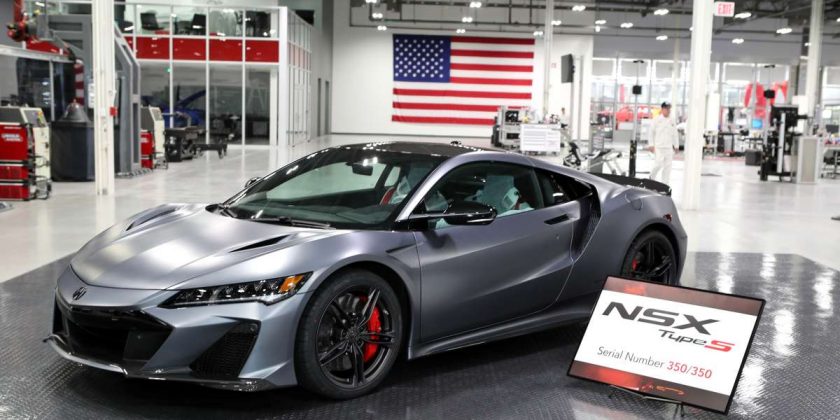 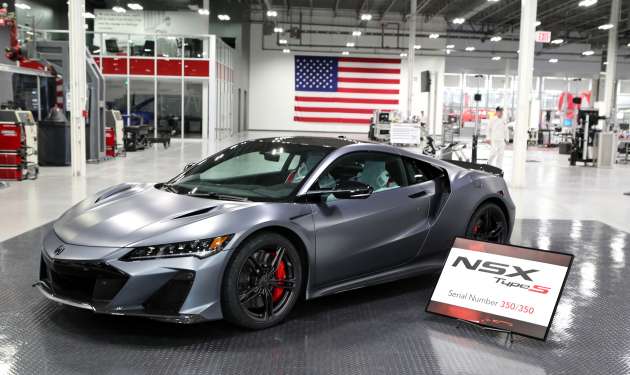 The Honda NSX is no more, for now. The final second-generation NSX recently rolled off the line at the Performance Manufacturing Center (PMC) in Marysville, Ohio. It was an Acura NSX Type S in Gotham Gray matte paint, #350 of 350 limited edition units.

The final NSX Type S marks the end of the hybrid-electric sportscar’s run, which began in 2016. Like the original NSX that’s now so revered and collectible, the second-generation NSX didn’t sell very well, and Honda decided to pull the plug after six years of production in the US. The Type S, announced in August 2021, was the car’s last hurrah.

The fastest and most capable Honda ever built was limited to 350 units, with the lion’s share (300 units) reserved for America, where it wears the Acura badge. The 3.5 litre twin-turbo V6 was given new turbochargers from the NSX GT3 Evo race car, increasing boost pressure by 5.6% to 1.11 bar. Higher-flow fuel injectors and revised intercoolers dissipate 15% more heat. All in, the ICE pushed out an extra 20 PS and 50 Nm of torque at 527 PS/600 Nm.

The three electric motors (two torque-vectoring units in front, one at the rear) remained, but the Intelligent Power Unit (IPU) lithium-ion battery was more efficient, allowing for a 20% increase in capacity and a 10% jump in output. The changes allowed Honda to retune the motors for increased performance in all situations. Total output jumped 27 PS and 22 Nm to 608 PS/667 Nm.

The nine-speed dual-clutch transmission was also tweaked, now sporting a Rapid Downshift feature that allowed the driver to skip several gears by simply holding down the left paddle. The reprogramming enabled the clutches to engage up to 50% faster for quicker upshifts in Sport and Sport+ modes, along with more instant automatic downshifts in Sport+. In Track mode, drivers can downshift earlier into corners thanks to a 1,500 rpm increase in the rev threshold. 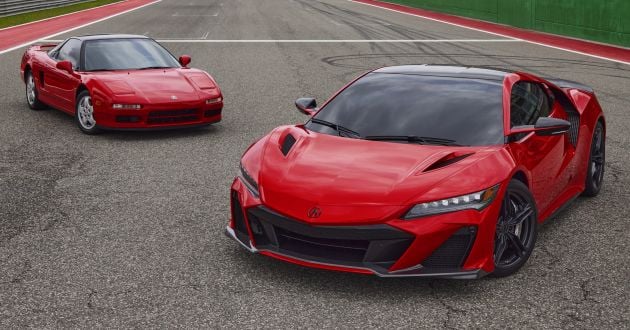 The Type S wears five-split-spoke forged alloy wheels (19-inch at the front, 20-inch at the rear) with an increased negative offset – which widened the track by 10 mm at the front and 20 mm at the rear – and bespoke Pirelli P Zero tyres. Together, they raise lateral grip by 6%. Honda claims that the Type S laps the Suzuka Circuit two seconds faster than the regular NSX.

While still recognisably an NSX, the Type S received a new face. Gone is the blacked-out look, replaced by a sharper nose and a gaping hexagonal air intake. Honda says that the latter directs more air into the radiators, while the smaller sub-radiators are fed by the two additional inlets on either side. Ducts at the corners channel air towards the sides to form an air curtain that reduces wake and allows more air to flow into the intercooler.