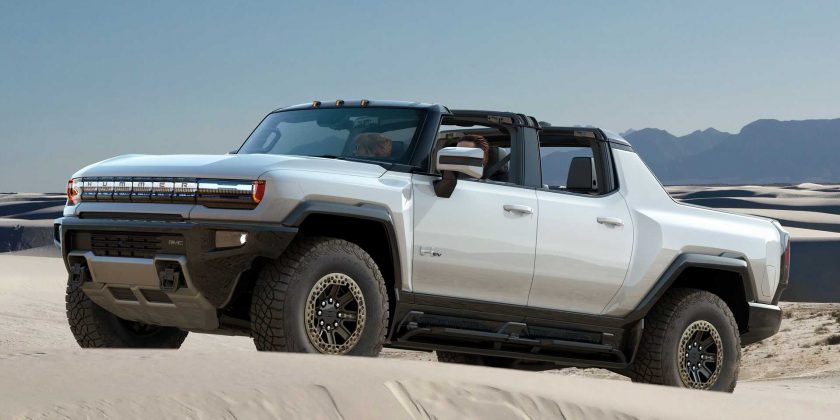 GMC revealed the first Hummer EV prototype in October of 2020, kicking things off with the loaded, limited-run Edition 1. That version promised up to 1,000 horsepower (746 kilowatts), a 0-60 time of under four seconds, and a handful of impressive features ahead of its Fall 2021 release date. Now, just over a year later, GMC is rolling out its production Hummers as promised; the first Edition 1 models will head to customers in just a few weeks.

On a virtual call with GM on November 23, the company confirmed that production of the first few Edition 1 models is underway, with the earliest pre-order holders getting access to their vehicles before the end of the year. GM says that this is the quickest the company has transitioned a vehicle from prototyping to production.

GMC won’t say exactly how many customers pre-ordered the Edition 1 – or even how many it will build throughout the year – but executives tell us that November was the second highest month for orders following the initial debut back in October. President Biden attending the Factory Zero grand opening and driving a Hummer EV prototype certainly made an impact.

The GMC Hummer EV Edition 1 pickups expected to hit the road next month will feature a standard tri-motor setup good for the aforementioned 1,000 horsepower and a 60 sprint of under four seconds. Those models will also achieve a confirmed 329 miles (529 km) of range, with standard features like SuperCruise active safety and the unique Crab Walk four-wheel steering setup.

The price for the Hummer EV Edition 1 is a cool $112,595, but other more-affordable variants will begin production next year, with deliveries expected sometime in 2023. And for the efficiency-minded enthusiasts, GMC says that those cheaper options will offer better range than the Edition 1. More details on future models to come.