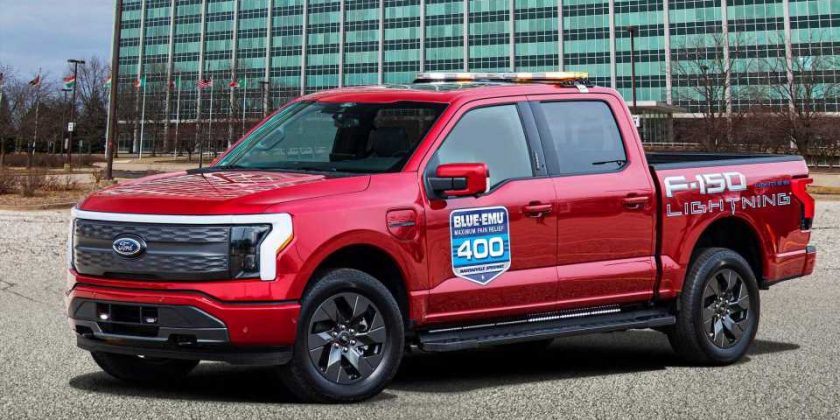 According to a Ford press release, the all-new F-150 Lightning will be the official pace vehicle at NASCAR’s upcoming weekend event at Martinsville Speedway. For those unaware, the Lightning is a fully electric pickup truck with instant torque and a whopping 563 horsepower, so it should fit in just fine at the event, which Ford notes will be televised across the country.

If someone had told you in the recent past that a fully electric pickup truck would eventually act as the “pace car” at a NASCAR event, you may have laughed. Well, perhaps fans of an EV website may not have laughed, but the general public may well be surprised to see a full-size truck leading the pack, especially when they realize it’s electric.

Ford has promised that the first F-150 Lightning electric trucks will be delivered this spring 2022. Currently, there are only two electric trucks on the market in the US: the Rivian R1T and the GMC Hummer EV. The R1T came to market in late September 2021 followed by the Hummer in December. However, neither is a very high-volume vehicle at this time.

Meanwhile, Ford has continued to up its investment in the F-150 Lightning and committed to increasing future production and deliveries. That said, it appears the electric truck is already sold out for the 2022 model year. Ford has received some 200,000 reservations for the truck since it was first unveiled in May 2021.

“Ford is fully invested in electrification and the response to Lightning has been so overwhelming that it was an easy decision to bring it to a NASCAR event. One thing we definitely know is that our fans love trucks and we’re confident that feeling will only grow when they see Lightning out on the track leading the field to green.”

Ford’s VP for electric vehicle programs Darren Palmer touted the Lightning’s impressive torque, acceleration, and 0-60 mph time. He noted that he thinks the electric F-150 is certain “to turn some heads out on the track.”

A year ago, Ford’s Mustang Mach-E electric crossover was the pace car at a NASCAR event at Talladega Superspeedway. Ford also reminds us that it was actually the first automaker to use an EV as a NASCAR pace vehicle when the Ford Focus Electric got the honors in April 2012.