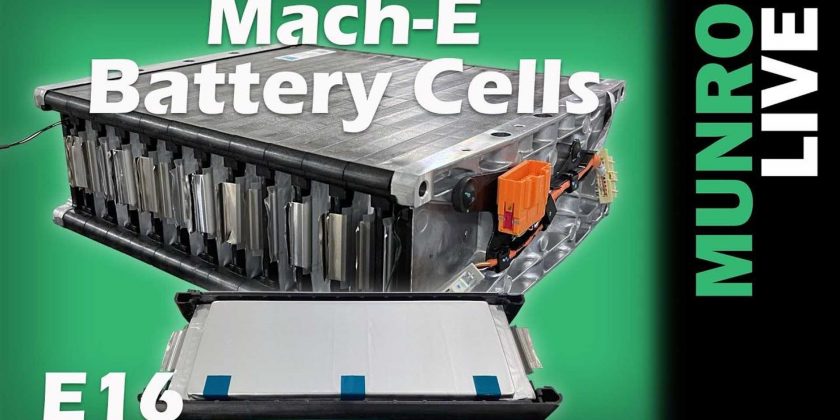 Let’s take a look at the Mach-E’s battery cells and modules.

In the latest episode of Munro Live, the team further examines the battery pack of the Ford Mustang Mach-E.

We already saw the pack, and now we can take a closer look at the battery tray and cooling after removing the battery modules, as well as the modules and cells themselves.

The lithium-ion pouch battery cells for the Mach-E are produced by LG Chem’s LG Energy Solution and they are similar in terms of form factor to the ones in the Chevrolet Bolt EV (also from LGES).

There are some differences in current collector plates between the two, as well as BMS electronics.

Cells are being put in the aluminum plates (to transfer heat) and then in injection-molded holders. A stack of those is combined into a battery module. According to Sandy Munro, it appears to be a more efficient design than in the Volkswagen ID.4 because of minimum use of aluminum.

Overall, the Mach-E pack appears to be a little bit improved compared to the older one in Bolt EV.

In the previous episode, Munro Live’s Cory Steuben and Ben Lindamood checked the thermal system components, that were compared to the Tesla Model Y a week ago: