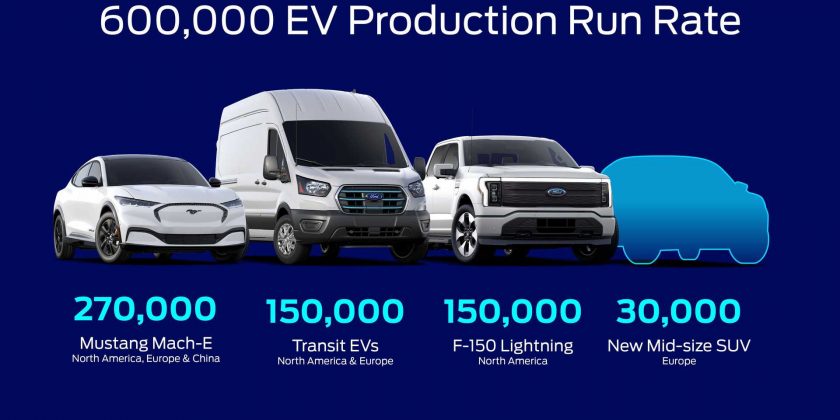 Ford announced that it has fully secured contracts for roughly 60 GWh of annual battery capacity to deliver a global 600,000 EV run rate by late 2023 (assuming 100 kWh per pack on average).

That’s the near-term target, revealed in late 2021 and confirmed in 2022, while in the mid-term, the company would like to exceed the 2 million run rate by late 2026. Contracts for 70% of the battery needs by 2026 are already secured.

Over the next four years, Ford expects a compound annual growth rate for BEVs to top 90%.

To achieve the targets, Ford says that it plans to invest over $50 billion in EVs through 2026, targeting total company adjusted EBIT margins of 10% and 8% EBIT margins for EVs by 2026. By 2030, more than half of its global production will be EVs.

“Ford’s new electric vehicle lineup has generated huge enthusiasm and demand, and now we are putting the industrial system in place to scale quickly. Our Model e team has moved with speed, focus and creativity to secure the battery capacity and raw materials we need to deliver breakthrough EVs for millions of customers.”

Ford officially announced that, in the near future, it will introduce Lithium Iron Phosphate (LFP) lithium-ion battery chemistry, which is in line with earlier reports.

“Ford is adding lithium iron phosphate (LFP) cell chemistry to its portfolio, alongside its existing nickel cobalt manganese (NCM) chemistry. This creates even more capacity for high-demand products and provides customers many years of operation with minimal range loss. It also reduces the reliance on scarce critical minerals such as nickel and, at current costs, brings a 10 to 15% bill of material savings for Ford versus NCM batteries.”

According to the press release, the LFP batteries will be supplied by the Chinese Contemporary Amperex Technology Co., Ltd. (CATL), which is the world’s largest EV battery manufacturer.

What’s interesting is that CATL will supply not only the prismatic cells but the whole battery packs for the Mach-E and F-150 Lightning, built using the company’s cell-to-pack technology.

At least initially, CATL’s batteries will be produced in China and shipped to North America.

However, the company is also negotiating a new agreement about a 40 GWh LFP battery plant in North America (2026).

As we can see below, CATL is not mentioned as a supplier in the case of the 40 GWh LFP project, but we guess that the company is in the game for the contract. Especially since there were multiple rumors about CATL scouting for a battery factory site in Mexico (where the Mach-E is produced). On the other hand, SK On might also be interested. 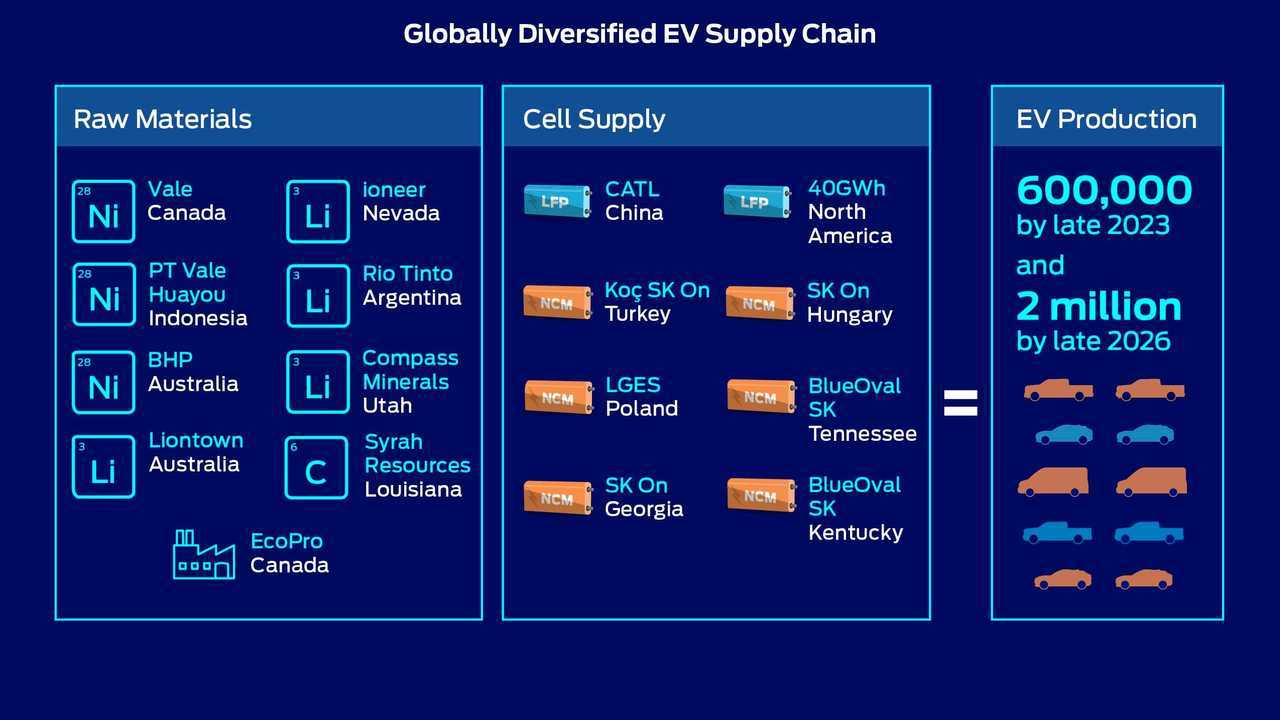 The foundation for Ford’s electrification is NCM batteries from LGES and SK On, but the addition of LFP might play a vital role later this decade as well.

Plus, SK On has installed capacity to support the scaling of Ford’s high-volume F-150 Lightning and E-Transits through late 2023 – scaling NCM cell production beyond earlier-planned levels from its Atlanta facility and providing new battery cell capacity from its Hungary operation.”

“Ford and CATL – the world’s largest battery producer – have signed a separate non-binding MOU to explore a cooperation for supplying batteries in Ford’s markets across China, Europe and North America.”

One of the pillars of the strategy is also direct sourcing of battery raw materials (like nickel, lithium and natural graphite) in the US, Canada, Australia, Indonesia and Argentina. Potentially, through a partnership with EcoPro BM and SK On, Ford might establish a cathode production facility in North America.