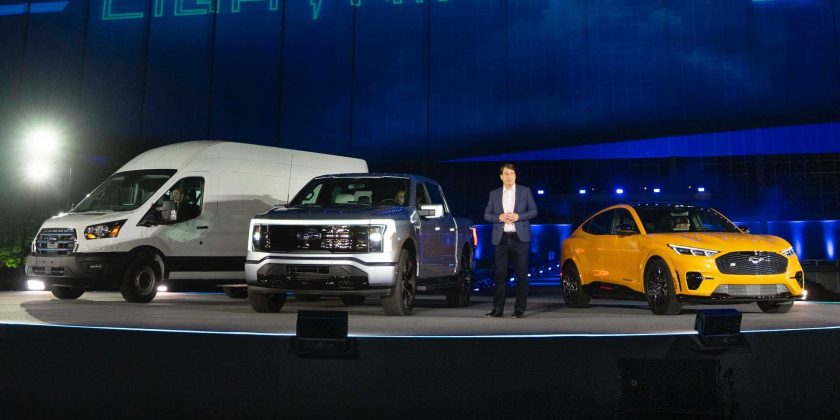 Ford COO for North America Lisa Drake also said that with the F-150 Lightning it does not plan “to cede truck leadership to anybody.”

For the first time since its founding in 1903, Ford Motor Company plans to spend more on electrified vehicles than internal combustion vehicles, and the first year when that will happen is 2023.

The timeline was mentioned by the automaker’s chief operating officer for North America, Lisa Drake, while discussing Ford’s investments in EVs at an event hosted by Barclays.

“In 2023 … we’ll spend more on EVs than we will on ICE. We’ve been over the moon about the success of Mach-E, and the F-150 Lightning, by bringing in over 70% new customers to the Ford brand. What that allows us to do is, now we have an opportunity not only to lead on our ICE business, but also in the EV space with F-150. So our aspirations are high.”

While it’s a bit unclear whether by EVs she meant all-electric vehicles or electrified vehicles (we’re more inclined toward the latter), Ford’s commitment to battery-powered vehicles seems serious. Earlier this year, Ford announced plans to increase its investments in electrification to $30 billion through 2025. Ford also expects to electrify 40% of its global lineup by 2030.

The automaker is currently rolling out its first wave of electric vehicles. Following the Mustang Mach-E’s debut late last year, Ford will launch the E-Transit all-electric van before the end of this year, followed by the F-150 Lightning in 2022. A Lincoln EV is also set to arrive next year.

Speaking about the all-electric F-150, Drake added that Ford’s aspirations are high and the company does not plan “to cede truck leadership to anybody.”

Ford CEO Jim Farley said last week that the automaker already has more than 120,000 non-binding reservations for the F-150 Lightning, with approximately 75% of those potential customers coming from other brands. The number is quite impressive considering that Ford only started taking pre-orders on May 19, 2021.

However, during approximately the same period, Tesla has racked up more than 250,000 reservations for the Cybertruck, with the total number exceeding 1.25 million, according to unofficial data from a fan-sourced reservation tracker.