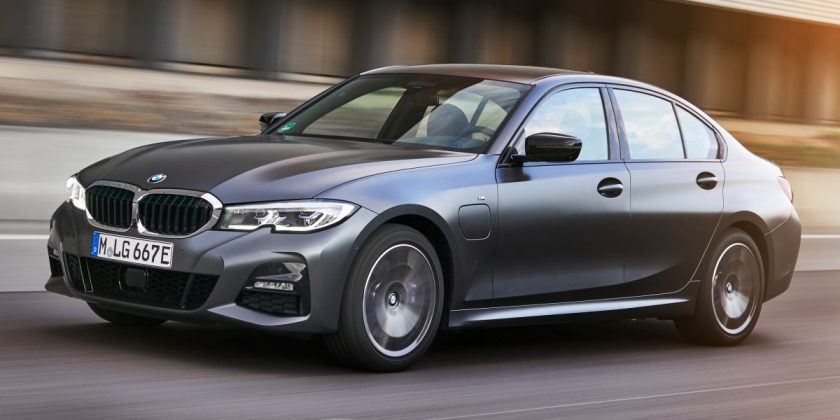 It’s already known that BMW Malaysia will be introducing the G20 BMW 330e in its M Sport form in the near future, what with the plug-in hybrid having been sighted out and about in Putrajaya last month. Now, specifications for the locally-assembled CKD model have emerged via a product document sighted by this publication.

The variant, revealed in November 2018 before going on sale in Europe in August last year, is powered by the same hybrid system set-up as seen on the F30 330e, in this case a B48 2.0 litre turbocharged four-cylinder and an electric motor, which is integrated into an eight-speed ZF-based Steptronic Sport automatic transmission.

Accessible via the Sport driving mode, under kick-down and in the gearbox’s sport and manual mode, this increases the total power for a short moment to 289 hp (292 PS). Performance figures for the 1,740 kg offering include a 0-100 km/h sprint time of 5.9 seconds and a top speed of 230 km/h, five km/h faster than the F30 version.

As for electric performance, a new 12.0 kWh lithium-ion battery offers up to 60 km of pure electric range, nearly double that of its predecessor. The new 330e can operate up to 140 km/h in pure EV mode, 20 km/h higher than before.

Also finding its way on is a M aerodynamics package. The hybrid will however feature a different suspension that the 330i – the 330e gets an Adaptive M suspension as opposed to the M Sport setup found on the 330i.

Inside, the cabin’s colours and trim mirrors that available for the M340i xDrive, which is also due to be introduced soon. Two colour schemes are available for the Vernasca leather upholstery, in black or Cognac, and aluminium tetragon interior trim finishers as well as BMW Individual headliner in an anthracite shade are also to be found.

The 330e also comes equipped with digital key capability, which offers keyless access via a NFC-enabled smartphone (currently, Samsung), although it might not be a lifetime thing, given that the feature is listed as being offered with a three-month trial.

In terms of driving assistance systems, Driving Assistant is briefly listed in the header in the specification box, and with an update in April already adding the package to the 330i M Sport and 320i Sport, the 330e should come equipped with autonomous emergency braking, lane departure warning, lane change warning, rear cross traffic alert and rear collision prevention. Parking assistant, a rear view camera and reversing assistant is highlighted.

Five exterior colours will be available for the 330e, these being Portimao Blue, Sunset Orange, Alpine White, Black Sapphire and Mineral Grey. The first four shades are shared with the M340i xDrive, which will be the company’s first-ever locally-assembled M Performance model.

The G20 330e will come with a five-year unlimited manufacturer warranty and five-years/100,000 km free scheduled service, and the battery will be covered under the company’s new eight-year or 160,000 km PHEV battery extended warranty programme that was introduced in June this year.

As for pricing, that hasn’t been finalised, but the document suggests an estimated price of around RM270,000 for the car, which would make it close to RM12k more than the F30 330e M Sport when that debuted in 2018. It remains unclear if BMW Malaysia will eventually phase out the 330i M Sport like it did with the F30 330i some time after the previous-gen 330e appeared. More details on the hybrid when it makes its debut.