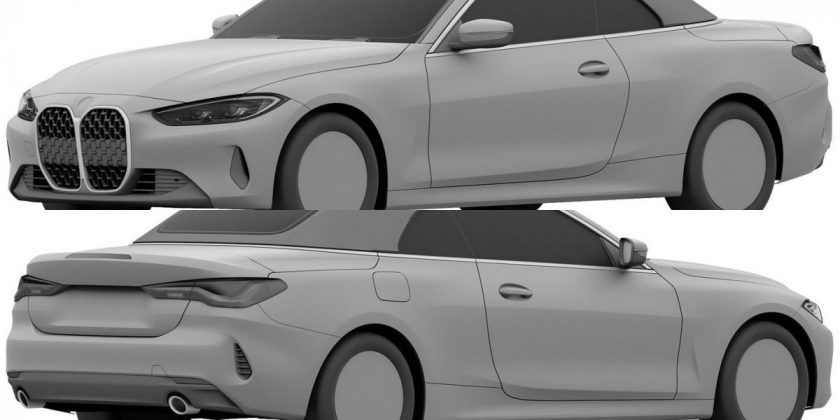 With the G22-generation BMW 4 Series Coupé having made its debut, its open-air twin should be not far behind, and here the 4 Series Convertible has been depicted in a filing with the National Intellectual Property Administration of China, images found courtesy of i4Talk, with the details of its exterior in full view; we now know for sure the Coupé grille will transfer to production.

The 4 Series Convertible in the patent images here appear to wear the non-M Sport bodykit, its front bumper doing without the side air intakes of the latter, sportier styling. This is confirmed at the car’s rear end, where the exhaust outlets are a pair of circular items, rather than the trapezoidal units on the M Sport-kitted car, and unique to the Convertible is the bootlid-integrated third brake light.

Earlier sightings of the upcoming 4 Series Convertible by our spy photographers confirm that the alfresco two-door will return to the fabric roof arrangement, in a departure from the folding hard top structure in a bid to reduce weight gain over its fixed roof sibling, as well as to reduce encroachment upon the luggage compartment.

The front half of the convertible’s cabin should mirror that of the Coupé, where a 10.25-inch infotainment display takes centre stage and a 12.3-inch instrument cluster features for the driver. Consequently, dashboard architecture should mimic that of the Coupé as well.

Powertrain choices on the 4 Series Convertible should mimic those on its Coupé twin, with four-cylinder choices comprised of a 420i and 430i with outputs of 184 hp/300 Nm and 258 hp/400 Nm, respectively. Top of the petrol range for the Coupé is the M440i, which sends 374 hp and 500 Nm of torque to all four wheels; this should also serve as the interim range-topper for the Convertible until the M4 arrives.