May’s GT Sport Daily Races kick off with a duo of real-world circuits and a little more practice for upcoming FIA events.

Race A provides a little bit of slow-paced action, using a pair of almost-identical twins from Toyota. You’ll be using the AE86s — the Corolla Levin with fixed headlights, and the Sprinter Trueno with vastly cooler pop-ups — to cover a five-lap race at the topographically tame Tsukuba Circuit. The race will provide you with the car, so just pick a color and go racing.

There’s a more classic GT Sport combination in Race B. In an event that could have appeared back on day one, you’ll head to the fictional Lago Maggiore circuit and the full GP layout, with your choice of Gr.3 race car. The short, four-lap event is a simple sprint with a rolling start and Racing Hard tires.

Last but not least is Race C, with an unusual event only possible virtually. The venue is California’s WeatherTech Raceway Laguna Seca, and the car is Japan’s top-tier open wheel Super Formula SF19. You’ll be taking charge of the Dallara for 15 laps, and 15 big heart-stopping moments at the Corkscrew, but there are some mild, complicating factors.

Firstly, you’ll only be allowed to use the Honda version of the car. There’s also the matter of the push-to-pass Overtake system: if you don’t already, you’ll need to map a controller button for this feature. Don’t forget the mandatory tire restriction too, with all players required to use the Racing Hard tire at least once in the race or face a 20-second post-race penalty.

These three races will run through to Monday, May 11, when another new set of three will replace them. 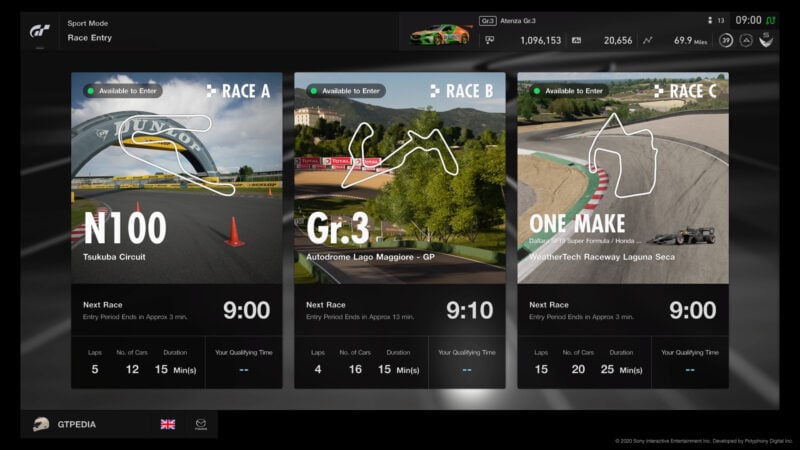