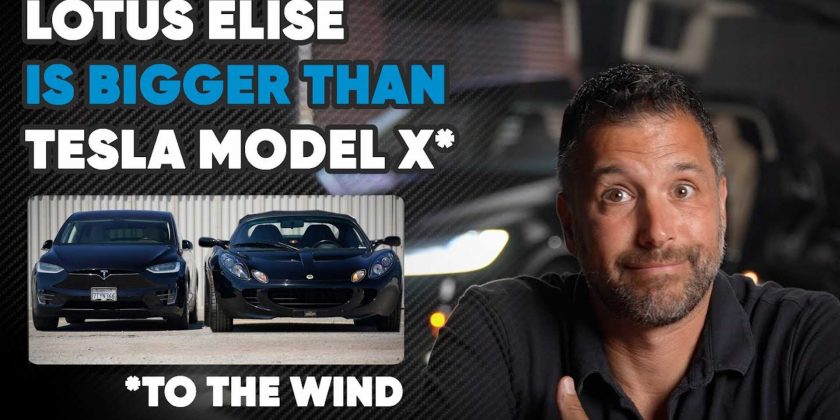 It’s apparently a common misconception that larger bodies have a negative impact on aero efficiency.

Drag coefficient is frequently used by automakers to give some sort of representation to highlight how aerodynamically efficient their vehicles are. However, if you were thinking that smaller cars are naturally more aerodynamic than larger cars, because they have a smaller frontal area, well, it’s not quite as simple as that.

In order to calculate a car’s aero credentials, you actually need to multiply the frontal area surface with the coefficient of drag. And as Jason Cammisa explains in this short video published on the newly invigorated Hagerty YouTube channel, you may reach some startling conclusions.

He compares two vehicles that would seemingly not be in the same league when it comes to aero: a Tesla Model X and a Lotus Elise. The former as a remarkably low coefficient (for an SUV) of just 0.24, but being a relatively big and tall vehicle, it has a relatively large frontal area.

The Lotus, on the other hand, has a lot less frontal area (1.6 times less, to be precise), but due to the many air intakes and the fact that its body is designed to produce some downforce, its coefficient of drag is 0.41 (according to information presented in the video; we found some variation of the value from several sources, although all values revolved around that number).

Basically, the Tesla Model X is marginally more aerodynamic than a Lotus Elise, all things considered. This may be counterintuitive, but the maths all adds up. What we will say, though, is wind and weather will affect the two cars differently (i.e. the Model X more) and the difference in the real world, the Elise would probably still be the slipperier car in strong wind or crosswind conditions.