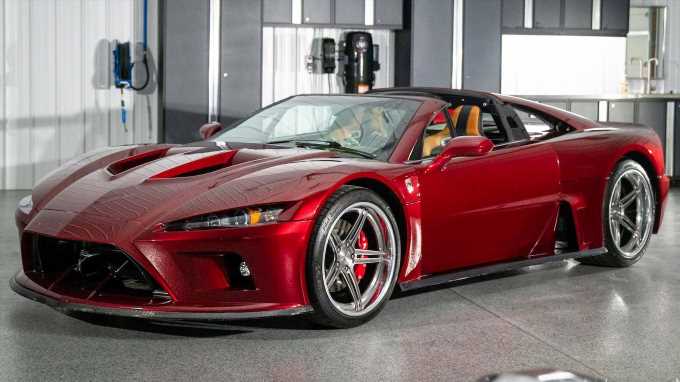 What springs to mind when we describe a mid-engined, Chevrolet smallblock V-8-powered, ‘Murican built supercar? Surprisingly, it’s not the current C8 Corvette. Nope, not the Hennessey Venom. Nuh-uh, it’s not from SSC, either. What, no dreams of the Falcon F7? And you call yourself an enthusiast.

We’re just joshin’ around. We’d be mighty surprised if the obscure Falcon F7 was the first thing you thought of, considering the company claims it built only seven of these angry-looking supercars since “production” began around 2013—and only a fraction of those made it to market. Intrigued? There’s one up for grabs on the popular auction site Cars and Bids if you’re feeling financially flush at the moment, but let’s break down just what your winning bid will buy you.

After 12 years of supplying body componentry for Dodge Vipers, engineer and designer Jeff Lemke indulged his dream of building his very own supercar with the launch of Falcon Motorsports in 2009, with the production-ready Falcon F7 landing three years later at the 2012 Detroit auto show.

All the supercar fundamentals are here. Underneath the carbon fiber and Kevlar composite body—a shape that Lemke calls a “cocktail” of his favorite cars like the Corvette, Ford GT, and the Ferrari 288 GTO—is a bespoke aluminum and Kevlar monocoque chassis carrying a modified 7.0-liter LS7 V-8 sourced from a C6 Corvette Z06. Upgraded guts from Lingenfelter and a wickedly cool carbon fiber intake manifold bumps the Falcon F7’s base power up to 620 hp and 585 lb-ft; the optional twin-turbo package nearly doubles that to a whopping 1,100 hp.

It’s an unabashedly analog car. Despite all the power and relatively complex carbon fiber construction, a gated six-speed manual transaxle is the sole transmission option. Even with the tricky shifter gates, Falcon claims a 0-60 mph time of 3.3 seconds for the naturally aspirated F7 and an eye-watering 2.7 seconds for the twin-turbo. Be brave—or very, very stupid—and the F7 will break the 200-mph barrier on its way to an unspecified top speed. Impressive performance, but not entirely surprising; all that carbon fiber and aluminum keeps the F7 to a relatively featherweight 2,785 pounds.

The interior is awash with leather upholstery contrasted by glossy exposed carbon fiber paneling, with billet aluminum trim for much of the switchgear and gauge surrounds. The finishing is not as tight and cohesive as modern production supercars, but c’mon—it’s not exactly a high-volume car.

So, there’s some good stuff here. This particular F7 is number three of seven produced and six surviving, and was the showcar at Falcon Motorsports’ 2014 Detroit auto show stand. It’s stuck within the same family since new, and has always gone back to the OEM for maintenance. Speaking of that, the seller says the clutch and one of the axle shafts were recently replaced prior to the sale.

If all this adds-up to the boutique American supercar of your dreams, head over to Cars and Bids to take a crack at winning this rare car for yourself.