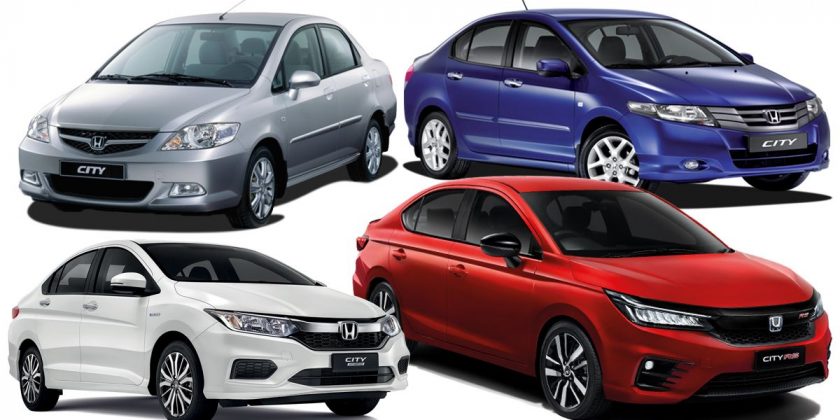 Last week, Honda Malaysia announced that the new City has amassed close to 9,000 bookings. That’s a big number when you consider that the car was launched just slightly more than a month ago on October 13, and the number of options available below RM100k today, which is unprecedented.

The Honda City is a stalwart in the B-segment sedan class, the default choice even, so the latest fifth-generation model has a fair bit of “name” to ride on. But it wasn’t always like that – back in the day, the Toyota Vios was a leader in what was a fresh segment for the Japanese marques – the sub-Civic/Corolla sedan. The City clawed away at the Vios’ head start, gen by gen, before overhauling its big rival.

Here, we take a look at the Malaysian sales numbers of the City and Vios through the generations. Toyota’s history here started in 2003 with the first-generation Vios, although this “Britney Spears Vios” (those who are old enough, remember the ads?) wasn’t the first “Asian car” for the Big T – that was the Soluna, which frequent visitors to Thailand might have noticed before (it slightly resembles the Corolla SEG, but with a higher butt).

With prices starting from just above RM70k, the first Vios was a big hit here, just like Hit Me Baby One More Time. The compact sedan was neatly styled and equipped, had a VVT-i engine and a central meter cluster – all those things were pretty novel back then. UMW Toyota Motor sold 66,583 units of the Vios from 2003 to 2007.

The Vios wasn’t first on the scene, though. When it was launched in May 2003, the second-generation Honda City (the first-gen looked like a mini Civic, remember Type Z? 80s JDM hatchbacks not part of the count) had just gone on sale for below RM80k. The first City launched by Honda Malaysia since its establishment in 2002, the second-gen City was revolutionary to say the least. Derived from the first Jazz, the GD City had an unusual shape that didn’t do much for a sedan’s looks; but boy was it spacious, and that’s before mentioning the versatility the origami-like Ultra Seats delivered.

The second-gen City was also mould-breaking mechanically, introducing the fuel-sipping i-DSI (Intelligent Dual and Sequential Ignition) engine and CVT automatic with steering shift buttons. It wasn’t pretty, and not at all sporty (despite a VTEC version coming along later), but it was a great family car that displayed plenty of innovation next to the conventional Vios. Honda sold over 61,500 of these from 2003 to 2008.

The next City was the third-generation GM2, which was a big departure from the GD. This one injected some “sport” back into the equation, with sharp lines and more balanced proportions – it was slightly longer and wider, but significantly less tall. No more i-DSI, no more CVT and no more beige interior – in came i-VTEC, a five-speed automatic and a black cabin. Having 120 PS also gave Honda fans something to shout about. Over 84,300 Malaysians bought one of these from 2008 to 2014.

Over in the Toyota camp, this was the era of the second-generation Vios, colloquially called the “Dugong Vios” for an alleged resemblance to the cute sea mammal. This sedan sister to the Yaris hatchback boasted significantly increased cabin and boot space, and a distinctive waterfall dashboard (central speedo remained), but the powertrain was carried over with slight tweaking. This XP90 Vios was a big success for UMWT, which sold 178,518 units from 2007 to 2013.

Toyota lands the first blow with the third-generation Vios, which was launched in Malaysia in October 2013. The XP150 – nicknamed “keli” (Malay for catfish) for the shape of its mouth – carried over the long-serving 1NZ-FE and 4AT powertrain combo, and the 2,550 mm wheelbase. The body was all new though; longer, taller and more aerodynamic than its round predecessor.

The Vios finally received a new engine in 2016, giving the 1NZ-FE – which has been in the Vios since the nameplate was born in 2003 – a well-deserved retirement. Shared with Perodua, the NR series engine with Dual VVT-i was paired to a CVT, which was also making its debut in the Vios.

In 2019, the Vios received a major overhaul to become the car that we know today. The highly-stylised front end, wraparound tail lamps and revamped dashboard gave Toyota’s entry sedan a fresh feel and a harmonised look with the Yaris hatchback. It’s unchanged under the skin, but that’s to be expected as the powertrain was updated in 2016. Combined, the third-gen Vios in its two guises have found 204,490 homes in Malaysia. Over to Honda. With the fourth-generation City, they hit the ball out of the park, so to speak. Debuting a few months after the Vios in March 2014, the GM6 City had a 2,600 mm wheelbase that freed up legroom exceeding Civic and Toyota Camry levels, it was claimed. Rear air con vents and a segment record 536-litre boot made it a great family car. The SOHC i-VTEC engine was just lightly improved, but Honda replaced the 5AT with a CVT, going back full circle with the gearbox.

The Solid Wing Face look of this generation really struck a chord with Malaysians, and over the course of six years, Honda sold over 209,000 units of the outgoing City. While 209k isn’t miles away from the Vios’ 205k, the Toyota had a head start of a few months, and 205k includes the heavily revamped 2019 Vios (City had a regular midlife minor change in 2017). Despite that, in 2019 (the final full year of sales for the outgoing City) the Honda comfortably outsold the fresh-faced Vios, and ended its run ahead of its contemporary nemesis.

Like true arch-rivals, both City and Vios have been reloaded for fresh battle as we speak. Honda launched the fifth-generation City last month, and a facelifted Vios is open for booking. The latter puts a new face on the 2019 Vios, and sales will be added to the 204,490 total, so when we revisit the numbers later, the “third-gen Vios” in its three guises would surely have passed the fourth-gen City’s total. Meanwhile, Honda has reset the counter with the fifth-gen City, which is at 2,400 units now.

The B-segment sedan market has never been more interesting – Honda will release the City RS i-MMD hybrid range topper in January 2021 to join the three existing petrol variants, and Toyota would have its 1.5L NA-only Vios facelift out by then. Meanwhile, the Nissan Almera – which is no longer the “cheap but ugly” option – is taking its own path with a 1.0L turbo engine.

The Nissan looks good, but at the end of the day, it’ll be Honda and Toyota duking it out for sales and bragging rights. It’s way more than just chest thumping though, as the City and Vios are major contributors to the brands’ overall sales and bottom line in Malaysia. Small they may be, but there’s a lot riding on these humble sedans.