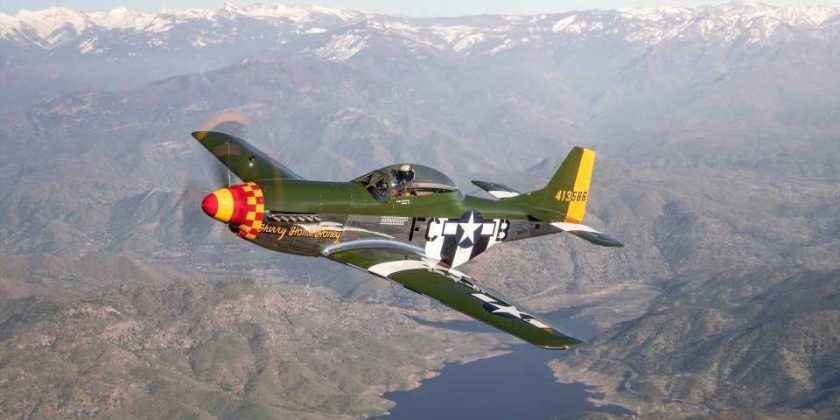 You can picture the scene, climbing into a scale P-51 Mustang and hearing the cackle of the exhaust that is close to that distinct unmuffled cacophony of a Merlin V-12. Once in the air, you can narrow your eyes just a touch and you’re there, in a flight of P-51 Mustangs, taking on the enemy.

Not all hot rods have four wheels and a steering wheel. Some invest that yearning for the thrill of acceleration and squeeze that fantasy inside the fuselage of a P-51 Mustang warbird. That was Rod Bower’s dream—to feel what it must have been like to sweep the skies behind the stick of the most famous fighter aircraft of World War II.

But, with the price tag of a real North American P-51 already escalating beyond what could be considered irrational, Rod had to find another way to live this dream.

He found a company now called Stewart 51 Partner that offered a 30,000-rivet recreation based on a 70-percent scale of the P-51 Mustang, branded the S-51. Original company owners Jim and Peggy Stewart designed their original kit around an iron 454ci big-block Chevy, remaining as true as possible to the Rolls Royce Merlin V-12-powered warbird. To Bower, that seemed like a really good idea.

The execution required not only a healthy budget and a willingness to do the job correctly but also a serious dollop of patience. The goal to put this plan to wing demanded over 25 years and an entire crew from engine designers/builders to mechanics and test pilots. Most of all, it demanded willingness to never give up on the dream. Rod Bower is now in his 80s, but his inspiration is finally a full-flight reality.

Building an aircraft, even with the more forgiving Federal Aviation Administration (FAA) rules for experimental versions, is not nearly as easy as building a ground-pounding hot rod. Physics applies its own limitations on what can be accomplished. But the fact is that this is a hot rod, and considering this airplane’s intended lineage, a mere 400-hp cast-iron 454 just wasn’t going to cut it. The plan quickly formed to build an all-aluminum 540 big-block, ideal because it was only going to spin about 4,500 rpm.

Related: How A Pontiac Pushrod Saved a B-29 Bomber

When building any aircraft, pilot and passenger safety must be of utmost concern. As an example, when mechanical engineer and designer Jim Czachorowski (his friends call him Zack) was working on the overall engine specs for the aircraft, he came up with a simple requirement. The plane had to continue flying even if full electrical power was lost. This way, as Zack says, “Even if the battery fell out of the plane, it would still fly.”

We’ll get to that achievement in a moment. More important was the simple aspect of power versus rpm when it comes to building an internal combustion engine for a prop-driven aircraft. The large, four-blade propeller like the one used in Bower’s S-51 was originally designed for a Beechcraft King Air turboprop aircraft. This was selected because it best fit the proportions of the 70-percent scale S-51. This propeller is designed for a maximum rotational speed of 2,200 rpm. At that speed, the prop tips approach the speed of sound, which degrades their efficiency.

This immediately limits engine rpm to less than 4,650 rpm. That is why older piston-driven aircraft used such huge engines to make enough power at low engine speeds to achieve those desired 400-mph flight speeds. In today’s world, the scale S-51 requires the use of what is called a prop speed reduction unit, or PSRU. Bower has built over 12 different aircraft but asked his friend Jim “Zack” Czachorowski for help with the design and construction of this S-51. Since Zack was in the midst of the same process with his own S-51, he agreed to help his close friend of nearly 30 years. Zack describes their PSRU unit as a simple two-spur-gear reduction box that cuts propeller speed roughly in half (2.13:1, to be exact). This reduces an engine spinning at 4,400 rpm down to a prop shaft speed of 2,065 rpm.

“Why build a scale replica of a P-51? Because we can’t afford the one we really want!” —Rod Bower, owner

To accommodate the prop setup, the engine had to be installed backwards in the airframe, with the flywheel facing forward. To spin the prop clockwise when viewing the propeller from the cockpit, and to keep the PSRU simple with just two spur gears, required a reverse-rotation engine. The Rat motor’s firing order was inverted to 1-2-7-5-6-3-4-8 from the normal 1-8-4-3-6-5-7-2, with the appropriate changes to a Crane hydraulic roller cam and a bullet-nosed billet crankshaft modified by Sonny Bryant, to accommodate its reverse rotation.

The original Stewart S-51 took all of this into account in its original design, but as those with experience with automotive accessory drives know, it’s common for these components to work themselves loose or spit a belt, or for brackets to crack or fail. In a car, these are minor inconveniences. In the air, these are problems that can quickly spell catastrophe.

Zack decided the best approach was to design the engine’s essential accessories so that, in the event of a complete electrical failure, the aircraft would continue to fly, and the pilot could maintain complete control. This meant items like the dry sump lubrication system, water pump, magneto, and even the fuel pump, had to be reliably engine-driven so that as long as the engine was spinning they would continue to function.

This also meant the engine had to employ a mechanical fuel-injection system, as opposed to a more sophisticated but more vulnerable electronic unit. The mechanical fuel injection system was designed by Airflow Performance Inc. to feed this 540ci big-block Chevy with eight mechanical fuel injector ports firing in batch configuration. This system allows in-flight air-fuel ratio changes to tune for situations like maximum power at takeoff, climb, and high-altitude cruising. This also makes the system incredibly reliable and immune to the problems that are not uncommon with electronic systems.

Easily the most challenging aspect of building this scale P-51 was creating a reliable accessory drive. Zack quickly determined the best way to accomplish this was to design and build his own using CNC-machined billet-aluminum components. This system also accommodates the Vortech centrifugal supercharger, and is belt-driven, since the loss of the belt would not prevent the engine from operating.

The accessory drive required 10 years of work to complete as Zack was also occupied with assembling the Bower aircraft at the same time. Zack built four additional units, including one for his own S-51 project. The water pump is directly driven off the crankshaft, while the oil and fuel pumps, magneto, and alternator are driven using large, 36mm-wide cogged-style belts inside the accessory drive.

As we mentioned, the main objective of the system is that the aircraft would still fly even in the event of a total electrical system failure. Zack told us that to prove its worthiness during the initial engine testing in the aircraft, he had pilot Elliot Seguin disconnect electrical power with the master switch with the engine idling on the ground and the magneto selected. The engine continued to spin normally, which proved to Seguin that the engine would continue to run normally in the event of an electrical failure.

Zack also wanted to fully test the engine and accessory drive on an engine dyno before it was fitted to the aircraft. He contacted Stewart Van Dyne’s shop in Huntington Beach, California, and the famous race shop configured the engine and PSRU so it could spin the dyno in the proper direction. While reducing the speed, the PSRU also multiplies torque, almost like a mechanical torque converter, and the big Rat motor’s torque pegged the dyno’s 1,650 lb-ft limit at less than 4,000 rpm, with crankshaft horsepower reading an impressive 640 hp at barely 4,750 rpm on 10 psi of boost.

This effort was also a packaging nightmare. Bonneville streamliner racers best understand the demands of having to fit everything inside the ridiculously tight constriction of the cowling and fuselage. But unlike hot rods, where hood scoops for turbochargers or superchargers can be forgiven, no such allowances exist when attempting to maintain the appearance of a P-51. The intake manifold is truncated, and the valve covers are TIG-sliced, because all those pieces have to squeeze within the narrow body lines. The most obvious deviation from the strict form-follows-function dictum are the six exhaust stacks on each side of the nose (only four of which are functional) that pay homage to the P-51’s original Merlin V-12.

The View From the Air

Inside the cockpit, things are also significantly different from the original P-51. The instrument panel is dominated by a computer screen displaying all the basic requirements for flight, including compass heading, exhaust gas temperature, engine rpm, TAS (true airspeed) and IAS (indicated airspeed), fuel usage, and a ton more. Surrounding this electronic display are several more traditional gauges you might have found in an original P-51, including airspeed, an artificial horizon, coolant pressure, oil pressure, and a basic mechanical compass. Finally, there are modern radios for communicating with tower control.

There is, of course, the traditional center stick that actuates a combination of the ailerons and elevators using mechanical controls. There’s no trigger for the P-51’s original 50-caliber machine guns; it was replaced, instead, with easy-access switches for the radio and flight trim. Throttle and mixture control are on the pilot’s left just below the canopy opening.

But, as any experienced car builder knows, not everything goes according to plan. Early test flights revealed that the S-51 was extremely stable and easy to fly, but suffering from several oil leaks emanating from a couple of locations. Those initial setbacks have been rectified, and now mechanic Eric Ritter’s four years of experience with the S-51—including a couple of engine changes—reveal that the engine swap ritual can be accomplished in roughly four hours. Not bad, considering this requires pulling the prop and attending to the jungle of safety wiring that is part of any aviation endeavor.

The crew now has multiple hours on the airframe, including the short stint to offer HOT ROD its air-to-air images, and plenty more flight hours are planned in the future. This is one fantasy of flight that did come true for Rod Bower and his son Jason—with a little help from many friends.

Flight Specs of the Stewart S-51