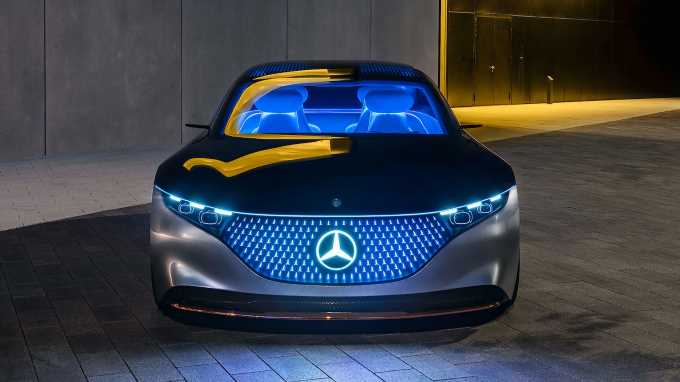 Oh dear. How did we get from there to here? I’m wracking my brain trying to think of a worse dreams-to-reality ratio than what Mercedes did by going from the incredible Vision EQS Concept to the actual EQS. The Lincoln Continental from a few years back, which began as the answer to, “What Would Don Draper Drive?” and ended up as a rebodied Ford Fusion with fussy seats? Another heart breaker was the sinister to the point of intimidating Jaguar C-XF, which then got declawed and became the first generation XF sedan. Then of course you have every Subaru concept ever. Forever. To reiterate, I was in love with the Vision EQS Concept, and am shocked at how comparatively dull the actual EQS is.

First things first: how bad is it in reality? I asked a photographer who worked on the press shots what the EQS is like in person. “Huge,” he told me, pointing out that in a studio by itself, the massiveness of the EQS isn’t apparent. “Pictures don’t convey the scale at all.” There are just millimeters of difference between it and the XL new S-Class. But how does it look in the flesh? “It’s just underwhelming.” Yeah. That’s the right way to put it. I’m seriously underwhelmed.

I have been visually underwhelmed by electric Mercedes models since I first saw (and drove) an EQC prototype. The prototype previewed the essentially identical production EQC400, which is basically a facelifted Mercedes-Benz GLC-Class, which is a pretty good-looking compact luxury SUV, with an electric powertrain. Have you heard the term butterface? It applies the melted-grille EQC. The design troubles of the EQS go far beyond the grille. I’d actually argue that—ignoring the rear end—the grille is the car’s best feature.

I suppose I should establish why the Vision EQS Concept is so good. Well, first of all, just look at it. Trite, I know, but what a great-looking car. Things that jump out at me? The masterful one-piece grille and headlight motif. Talk about a party trick. Exceptional, especially in this day and age of shrinking headlights and massive grilles, the front end of the Vision EQS was a mature, bold statement.

Next, check out how the front tire pokes up into the hood. So slick. Yes, the show car is no doubt rolling on a set of 24- or 26-inch wheels, but we’re talking design. Plus, have you ever seen better use of two-tone paint? Not since the 1955 Chevy Bel Air. I should add that two shades of paint tend to make cars look old and fuddy duddy. Not here. No, here we’re looking at the future.

Other stuff. The hidden B-pillar is also clutch, especially considering how the brightwork around the greenhouse is a single line, like a bow. So choice. The Vision EQS also looked muscular. Big, sure, but like a tiger, not a hippopotamus. The shape conveys strength and power—athleticism—even though it’s also obviously a luxury car. I haven’t seen this done so well since the recently departed Jaguar XJ. Also, the little pieces of copper (batteries, get it?) along the bottom edge sets the whole thing off. Again, masterful.

Many people—including a large swath of the MotorTrend staff—have mentioned that the EQS bears a resemblance to the Tom Gale-era Dodge Intrepid. That’s neither accurate nor fair to the handsome Intrepid. Here’s why it’s not accurate. Almost three decades ago, Chrysler launched its cab-forward LH platform. The idea behind it was that since big cars were all going front-wheel drive, then Chrysler might as well embrace such engineering with a smart design. The result was a nice-looking sedan with an utterly massive front overhang. Not only that, but the front doors nearly touch the wheel wells. Dash-to-axle ratio? Look elsewhere.

But as you can see, the Mercedes EQS actually has a nice, big dash-to-axle ratio (this term essentially refers to the amount of metal between the front door and the wheel well). It’s just that the A-pillar comes charging forward, landing at the front wheel. This is bad for two reasons. The first is that it just screams front-wheel drive. Now, in the brave new EV world, FWD doesn’t mean what it used to (FWD is typically a cost-saving, packaging decision), but in the rarified world of big Mercedes models with equally big price tags, projecting cheapness is nicht gut. Also, typically speaking, good car design says that the highest part of the front fender (the fender peak) should be right over the center of the front wheel. Here it’s certainly not, as the fender peak is closest to the front windshield. The Lexus LC sorta, kinda, almost pulls this off, but not really. On the Vision EQS? The fender peak is right on top of the center of the front wheel.

The second negative effect, and this is the far bigger design crime? Having an A-pillar jut that far forward creates a horrid little triangle—just like on a Toyota Prius! Ick! Lots of other non-premium front drivers have these terrible triangular pieces of glass, too. True, but here it’s not glass, as it appears to be black plastic with the letters “EQS” attempting to hide it. But still, yuck. When it came to the Vision EQS, the design team was smart enough to plug this triangle (called a sail) with a rearview mirror, but the production car opts for a body-mounted mirror (quieter, better for aero) rather than a sail mounted one. The results make me sad.

Sadly, much more went wrong. The grille and the headlights aren’t one piece. Not a showstopper, but man, did that sing on the Vision EQS. Since the wheels are smaller (I love how I’m calling 21-inch wheels “smaller”), the tires don’t flow into the fender/hood in the same elegant way as on the concept. The two-tone paint draws attention to this by overemphasizing the lines that separate the front fascia from the rest of the car. The same happens to the rectangular chunk of metal between the wheel and the front door. But at least Mercedes put the service panel door to access the windshield wiper fluid there! Kidding, that looks bad. I’ll say this now—service panels and charging ports need to be hidden. Front fenders are for displaying badges or brightwork. On the EQS, this service panel looks like a third door handle.

I could go on (Why not hide the B-pillar? What happened to the trailing edge of the rear door cut line?), however, suffice to say that the EQS is a design swing and a miss. Mercedes can dismiss much of the criticism by saying that it was trying to achieve the lowest drag coefficient ever seen on a production car—which it did courtesy of the EQS EV’s 0.20 Cd. I’ll counter by quoting my colleague Christian Seabaugh, who said, “So what?” He then pointed out that the fantastic new Audi A6 E-Tron Concept has a Cd of 0.22, but is twenty times better looking.

I’ll end by quoting a legendary designer friend of mine. We were at a bar later one night at the Geneva Motor Show. I was with McLaren. I was fighting with company representatives over how terrible I thought the Senna looked, with them saying that I don’t get it—the Senna “had to look” the way it did. Function over form and all that. My friend, nameless as he remains here, grabbed a hold of my phone that had a picture of the malformed Senna and said, “It didn’t have to look like this. You chose to make it look like this.” The same is true with the EQS. I’ll go further and say this is worse, as Mercedes had a perfectly handsome design just raring to go.