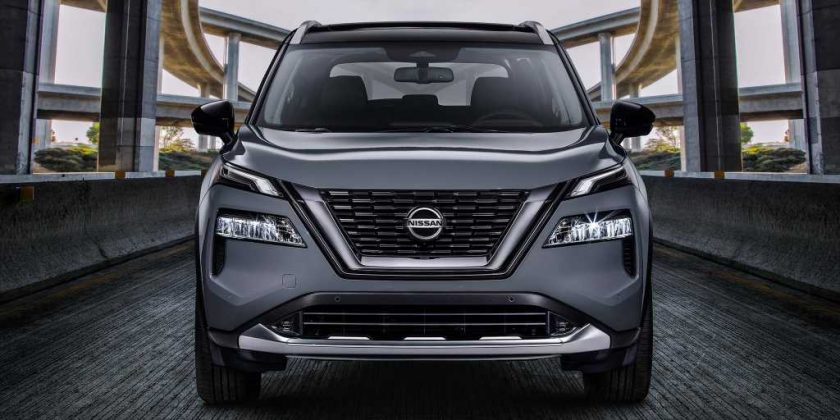 To earn the No. 3 spot on the compact-SUV sales chart, the current Nissan Rogue clearly enjoys wide customer appeal. The 2021 model shrinks a bit outside, while the interior grows in some measurements and shrinks in others. How does the 2021 Nissan Rogue stack up against top-selling competitors like the Toyota RAV4, Honda CR-V, Chevy Equinox, Ford Escape, and staff favorites like the Mazda CX-5 and Subaru Forester? A quick perusal of the spec charts suggests Nissan might be happy with its third-place lot in life.

How does Passenger Space Compare?

Front seat volume is less crucial because the seat tracks move to make most legs comfortable—and for 2021 the range of motion in both directions is increased. And with no three-place front bench seat, shoulder room is less important. Headroom matters, and Nissan has been selling a best-in-class 41.6 inches of it. That shrinks to 41.1 inches because the roof was lowered 0.4 inch (adding a sunroof subtracts another 2 inches). Rear seat space was lacking in the outgoing Rogue, so Nissan reapportioned some length from the front to the back, trading 1.5 inches of front legroom for 0.6 inch more in back. There’s also 0.7 inch more rear headroom (1.2 more with a sunroof), while shoulder room remains unchanged. That pencils to a 1.6-cubic-foot rear-passenger volume improvement to 48.8 cubes without a sunroof (the improvement is 2.2 cubes to 47.1 with sunroof). Those figures bump the Rogue’s rear seat from ninth of ten (besting only the RAV4) to seventh, passing the aging Hyundai Tucson and Kia Sportage. In terms of overall passenger space, however, the Rogue holds its fourth-place ranking, behind Forester, Escape, and CR-V.

How does Cargo Space Compare?

The Rogue shrank in length and height but adopted a slightly blockier design that helped add 4.1 cubic feet of overall seats-down cargo space, for 74.1 in total. That ranks Rogue third behind the Subaru Forester and Honda CR-V. The top three all rank well ahead of the rest of the competition, which measures from 54.7 (Jeep Cherokee) to 69.8 (Toyota RAV4). Put the rear seats up, and we notice that those 1.6-2.2 cubes of passenger space the Rogue gained come at a cost of 2.8 cubic feet of cargo space. Nevertheless, the remaining 36.5 cubic feet still rank Rogue third—now behind the CR-V (39.2) and RAV4 (37.6).

How Big is it on the Outside?

Even after shrinking 1.7 inches in length and 0.4 inch in height, the Rogue remains second-longest (to Equinox) on the third longest wheelbase (tied with Jeep Cherokee). Only the Subaru is narrower, and overall height ranks right in the middle, but in terms of squeezing the most people and cargo space out into the least exterior length, height, and width, the Rogue again ranks third—now behind the boxier Subaru Forester and Honda CR-V.

How Do the Powertrains Compare?

Nissan continues to offer just one powertrain option—a (new) naturally aspirated 2.5-liter I-4 teamed with a CVT. That ranks as the biggest displacement engine in the class, but competitors often team turbos and/or hybridization with their equivalent or smaller engines, which leaves Nissan’s 181 hp and 181 lb-ft decidedly mid-pack (and below the class averages, which are in the mid-190s for each). Transmission options span six, eight, and nine-speed automatics as well as other continuously variable transmissions, which always aim to optimize performance and fuel economy. The Rogue’s performance should rank solidly mid-pack.

Where Does the Rogue’s Fuel Economy Rank Among Non-Hybrids?

Darned impressively is the short answer. The front-driver’s 30 mpg combined ties for best in class with the Escape 1.5T, CR-V 1.5T, and RAV4 2.5 front drivers. Specify all-wheel drive, and you only lose a single combined mpg for 29, tying the CRV 1.5T AWD, and the Subaru Forester at the top of the class.

What About Towing Capacity?

Nissan boosts the max towing capacity from 1,102 to 1,350 pounds for 2021, but that still ranks at the bottom of the class for those that are rated to tow at all. The Chevrolet Equinox, Ford Escape, and Toyota RAV4 can all manage a small travel-trailer camper or fishing boat at 3,500 pounds with the right equipment; there are abundant options available offering 2,000-pound towing capacities suitable for a pop-up camper, and 1,500 pounds is the typical entry-level towing capacity for the class. The Rogue will need to stick to towing rowboats and utility trailers.