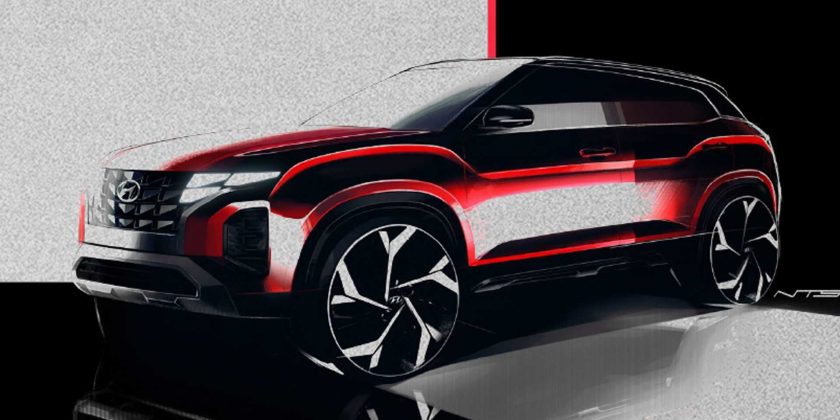 The Hyundai Creta made its original debut back in 2015 as an affordable crossover from South Korea for the emerging markets. In 2019, the second generation of the model was launched with a completely redesigned interior and exterior inspired by the larger high-riding vehicles of the brand. Now, Hyundai is preparing a major update for the second-gen Creta and has just released the first teaser images with the model.

Hyundai has published only a few sketches with the restyled Creta, but that already confirms what we’ve seen in several spy shots – the small crossover will completely abandon the look of its predecessor to adopt the brand’s visual identity launched with the new Tucson. In other words, it will have a wide grille with integrated lights inside the grille. The lower part of the front fascia may feature additional tweaks.

The other available exterior drawing shows the rear of the Creta and it appears to have retained the look we are already familiar with featuring a split taillight design. The last sketch depicts the cabin and, apart from the fact that this is a right-hand drive model, it looks to be practically identical to the Creta that’s available at the company’s showrooms today.

The Creta is obviously not available in the United States and Autocar India reports the updated version will make its debut in Indonesia first in five- and seven-seat configurations. Local media reports the premiere is scheduled for December this year and sales should kick off in the early months of next year. After the Indonesian launch of the facelifted Creta, the crossover will eventually be launched in China, Thailand, Brazil, and other countries.

However, our Brazilian colleagues from Motor1.com Brazil report the facelifted Creta won’t arrive soon in the country. The local division of Hyundai launched the second-gen Creta just earlier this year, and it will take at least a few years until the refreshed model arrives there. Nothing of this is official though, and we expect to learn more in the coming months.