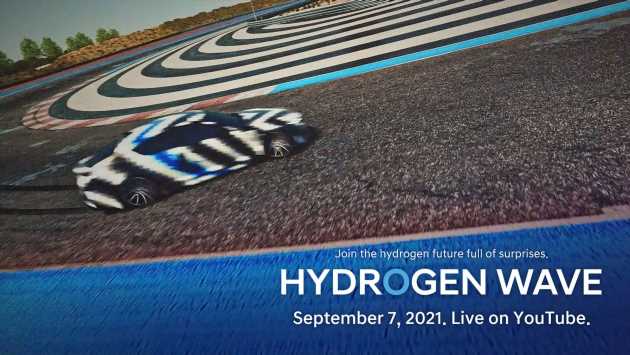 Hyundai will set out its vision of a line-up of hydrogen fuel cell electric vehicles for the future and more, at an online forum on September 7th.

Among the reveals at the ‘Hydrogen Wave’ event will be a hydrogen fuel cell electric sports saloon, which can be seen tearing around a race track in a newly released teaser video.

The mystery hydrogen performance car looks to be a BMW 3 Series-sized saloon, and shares little with Hyundai’s current model line-up. It has a similar angular headlight design and sloping rear deck to the US-only Elantra N, but the glasshouse is entirely different, suggesting an all-new model with cutting edge powertrain technology. From the exuberant powerslides in this teaser video, it’s safe to assume that the new car will be rear-wheel drive, or four-wheel drive with a drift mode.

Alongside the sports vehicle, the brand will reveal more future fuel cell concepts and prototypes during the event.

Hyundai will also look to debut ‘next-generation hydrogen fuel-cell systems’ in a number of new applications. To this effect, the event will cover applications of hydrogen technology beyond conventional cars, including hydrogen-powered commercial and public transport vehicles.

Hyundai has been a key player in hydrogen fuel cell technology in recent times, having released a hydrogen-electric SUV in 2018, called the Nexo, and a hydrogen-powered version of its ix35 back in 2015. The company also has a hydrogen sub-division called HTWO, and branding for this company can be seen in some of the teaser clips issued before the Hydrogen Wave forum next month.