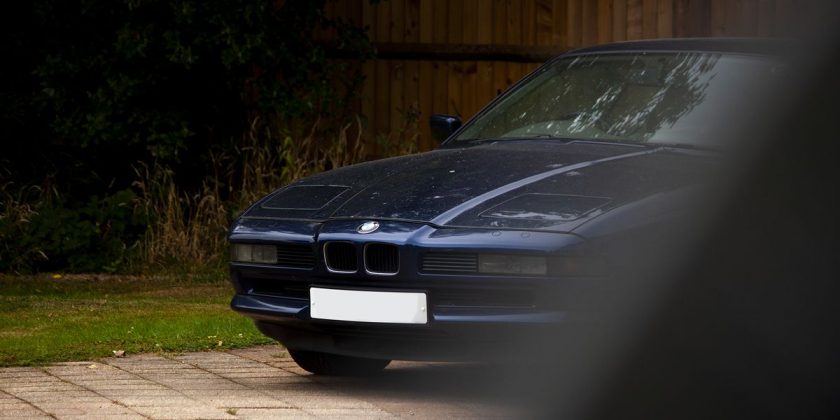 It was late 2003 when my mum brought home a DVD called ‘The Italian Job’. No, not that Italian Job. It was the rather sub-par 2000s remake. I was a 6-year-old with an already unhealthy car obsession who spent most days watching 2 Fast 2 Furious on repeat.

It’s worth noting that my family was pretty much solely into classic Italian cars. We were never a BMW family. In fact my dad was fervently against them; ‘A BM troubles you’ was the rib-cracking proverb anytime one was mentioned, so naturally I grew up thinking the same.

Thirty minutes into the wonky Wahlberg remake, Jason Statham’s character turns up in black BMW 840 on polished M-Parallels. I was used to the svelte curves and gentle edges of Alfas and Lancias, I’d never seen a car like this before. “Whoa, what’s that?” I remember asking my dad. “That is a BMW 8-series. I always wanted one back in the 90s. Cool looking car.”

The impact that sentence made on me was huge. My dad, the self proclaimed BMW hater, actually liked one? Surely it must be a pretty special car, then. After finishing the movie I spent hours reading up about the E31. A few weeks later, while waiting to be picked up from school, I saw a blue 850 drive past. It wasn’t going at speed, or making much noise, but it had more presence than any car I’d ever seen before. It looked so effortlessly cool and unlike anything driving around it.

I told myself in that moment: “One day, I’ll have one of those.”

Well, that day was the 12 August 2020. Enter this, an incredibly tatty Mauritius Blue M70-powered 850i auto which, as of a week ago, I own. What in the world have I gotten myself into? The simple answer to that is: I don’t know, but I’m looking forward to finding out.

I’ve been keeping an eye on the E31 market for a long time and I’ve watched the prices steadily rise. Remember the Top Gear challenge where Hammond and Clarkson buy used cars for cheap? Hammond bought an 850Ci with 54,000 miles for just £6,700. That was in 2011, and the price today for a low mileage 850 is certainly not under the £7k mark. So I thought ‘screw it’. If I’m going to lose all my money and go bankrupt, I’m going to do it in a blaze of glory. I’m going to buy one of my dream cars before it gets too far away from my budget.

Now, budget is the key word here, because I knew that if I was going to buy one it would need to be cheap. Very cheap. And it was! In fact I’ll have to come up with a clickable thumbnail because I believe that ‘I BOUGHT THE CHEAPEST ROADWORTHY 850I IN EUROPE?!?! (GONE WRONG)(EMOTIONAL)’ …but there’s a very good reason for the low cost this car came at.

Firstly, the car has 150,000 miles on it, and no service history. Yes you read that correctly. Then, onto the car itself, which, in my week or so of ownership, has led me to make the following list of things that need attention. Deep breath:

Oh, you thought I was done with the list? No, absolutely not. Do keep reading.

Now I’d forgive you if you were asking at this point why on earth I’d buy that absolute shitheap of a car. The answer is simple. A) I knew that at the price this car came, there was a good chance I could fix it and have a decent running example for well under market value. B) I hate the idea of cars dying a death because the time/money investment outweighs the return. Don’t get me wrong, I’m not one for personifying a car, I find that very odd. However it does make me sad to think that a car never gets to drive again because it can’t justify its own existence.

That’s what would have likely happened to this car. It would have been broken up for spares and never seen the road again. There’s a certain nobility in a car being broken for parts. Their sacrifice allows other enthusiasts to keep their car alive. It might be because this was the same colour I saw driving past me all those years ago, but when I saw this car I wanted to save it. The idea of saving it, restoring it, and driving it past my school just like someone did 17 years ago, was too good not to do. I had to have it.

This might sound like the meaningless unhinged ramblings of someone so far gone that they bought a 30-year-old V12 BMW at age 23, but to me it all makes sense. I think. Either that or I’m already hitting my mid-life crisis. You decide.

As car people I think we naturally get stuck into habits, and more specifically into the same type of cars. I’ve always owned and worked on MX-5s (I know, I know). They’re plentiful, easy to work on, mildly adequate to drive, and most importantly, cheap. I don’t actually like the things, but I kept working on them because it’s what I knew and what was easiest.

The E31 has been a breath of fresh air. As strange as it sounds, I love that it’s a struggle to do things again. It’s rewarding to work on because you need to re-learn the very basics you get so used to when you work on the same cars all the time.

I’m in a unique and lucky situation where I have the tools, time and a modicum of the experience needed to work on this car, as well as getting it for a good enough deal that means I won’t lose out too badly if (read: when) everything goes wrong. Even if it does go belly-up, though, I could at least tell childhood me that I did end up buying that wonderful spaceship of a car we always wanted so badly, and that’s good enough for me.