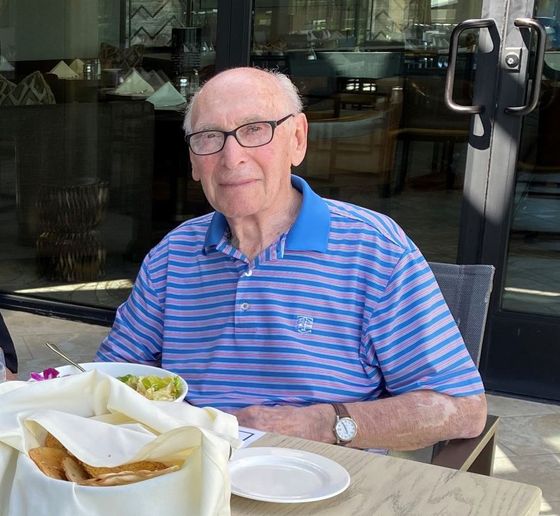 Morris Belzberg, pictured in March of this year, opened the first Budget location in Calgary in 1962. He went on to serve as Budget's chairman and CEO through the 1970s and 1980s.

Morris Belzberg, former chairman and CEO of Budget Rent a Car and one of its earliest and largest franchisees, died peacefully on May 2 at his home in Rancho Mirage, Calif.

A son of Jewish immigrants from Poland and a native of Calgary in Alberta, Canada, Belzberg started his career in car rental when he took his family to the Seattle World’s Fair. There he encountered Jules Lederer, the architect of the Budget Rent a Car system, who had a booth selling franchises.

Indicative of the handshakes that opened territories for franchisees back then, “Morris got the rights to Alberta for a fishing rod, true story,” claims Syd Belzberg, his nephew, who owned Budget Vancouver.

Belzberg went on to open the first Budget location in Calgary in 1962 and acquired additional franchises over the next few years.

Syd Belzberg recounted that Morris was instrumental in convincing the Canadian government that Budget was a big enough player to be on the airports. “Literally in one day, Budget was opening in all the (Canadian) airports,” Belzberg said.

When Budget was acquired by Transamerica Corp. in 1968, Belzberg was named executive vice president. He climbed to president of the company in 1969 and became CEO in 1971. As CEO, Belzberg used his Canadian government relations experience to spearhead the effort in the U.S. to open airports to Budget licensees.

Belzberg became chairman of Budget in 1987 and left the company in 1989. In 2002, Belzberg was brought back to serve on the company’s board of directors.

After his initial career at Budget, Belzberg acquired a minority stake in the Minnesota North Stars. In 1991, he acquired 50% of the Pittsburgh Penguins, selling his interest in 1997.

Belzberg’s associates at Budget remember his marketing savvy and his ability to manage a powerful group of franchisees, which by 1987 numbered 350 in the U.S. and comprised the entirety of overseas locations.

“We at Budget in Canada took great pleasure in hearing how the Budget brand came to be in this country and the challenges he faced and overcame, as ‘Budget’s father’ in building a new car rental brand in Canada,” said Anna Edwards, director of licensee operations, Americas for Avis Budget Group.

“He was a marketeer more than a rental car operator,” said Roger Gelder, of Budget Atlanta, one of the largest licensees since 1972. “I give him full credit for propelling Budget into the major league of car rental.”

Gelder referenced Belzberg’s ideas for promotions involving golf clubs and exotic black soap. More important, Gelder said, was his campaign to “Rent a Lincoln from Budget at the price of a full-size car from Hertz.”

“Car rental never had any master marketers until Morris came along,” said Sandy Miller, who started as a Budget franchisee before becoming chairman and CEO of Budget Group Inc. in 1997. Belzberg was as an advisor to Miller during his tenure as Budget’s CEO.

While effective marketing starts with a great idea, it depends on execution. In the car rental industry at the time, that meant getting the industry’s franchisees to agree on the price and terms, Miller said.

“He knew how to handle the franchisees,” he said. “His goal in life was to take guys like me and make us successful.”

Miller referenced a deal Belzberg cut with Ford regarding a repurchase program for 100,000 Ford Rangers with truck caps. “That worked out great for everyone,” Miller said.