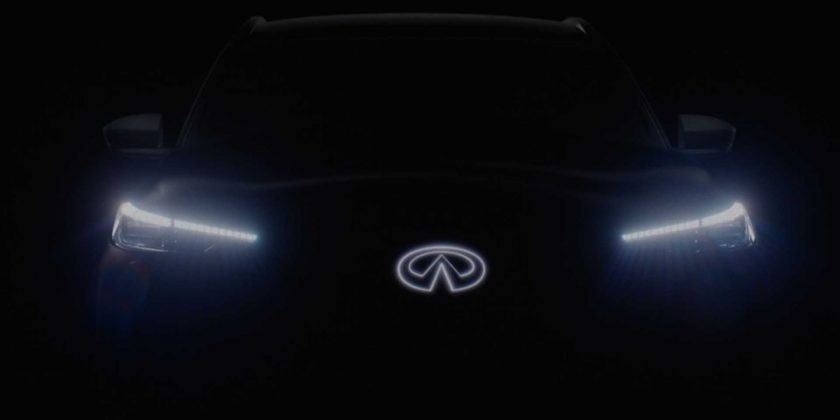 The Infiniti QX60 Monograph will debut the brand’s new design direction for the three-row crossover. Much like the recent Jeep Grand Wagoneer Concept, expect this to be a near-production prototype for the next-gen QX60 that arrives in 2021.

Infiniti hasn’t yet started the livestream for the QX60 Monograph’s unveiling. We’ll embed the video once it begins

The QX60 Monograph’s debut will take place at Infiniti’s new global headquarters in Yokohama, Japan. They will also be a look at its design studio in Atsugi, Japan.

Infiniti’s teasers haven’t revealed much of the QX60 Monograph’s new styling direction. A shadowy glimpse of the front shows narrow, pointed headlights with LED running lights running along the top edge. A photo showing a sliver of the tail reveals a black roof and smooth lines. The taillights appear to span the entire length of the tail.

Inside, the QX60 Monograph allegedly has a big infotainment display measuring between 10 and 12 inches. Expect Infiniti to fill the model with its latest technology, too.

The current QX60 started life as the Infiniti JX that arrived for the 2013 model year. This was before the brand’s model name change. It received a refresh for the 2016 model year and a more powerful engine for 2017.

Amid the change in strategy for the Renault-Nissan-Mitsubishi Alliance, Infiniti is at the very beginning of a brand reboot. The plan is for the marque to focus on success in the United States and China. Future models might share more with Nissan products, including the possibility of abandoning rear-wheel-drive sedans.

Future Infinitis will use an exclusive version of Nissan’s e-Power hybrid powertrain. The setup will allegedly give future products more power than current ones. A fully electric drivetrain will eventually also be available.