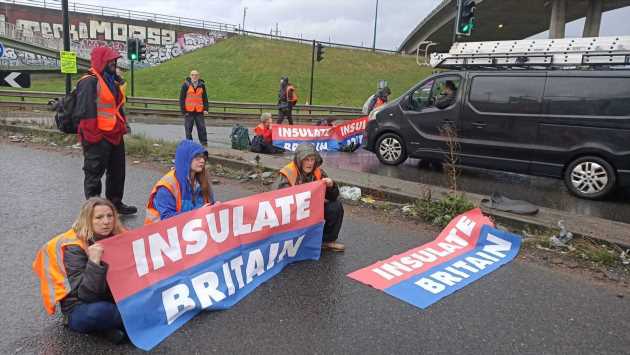 A total of 32 Insulate Britain protestors who blocked roads in the UK are set to face charges for breaching a court injunction.

Nine individuals have already been summoned to the High Court for 16 November, with a further 23 expecting to be charged in the near future. The protestors are facing charges of contempt of court – if found guilty, they could receive unlimited fines and prison sentences of up to two years.

It comes after the group continued its roadblock campaign despite fresh injunctions being taken out, with around 60 protestors disrupting traffic in London, Birmingham and Manchester on Tuesday 2 November.

The latest interim injunction banned “activities that obstruct traffic and prevent access to 4,300 miles of motorways and major A roads” and outlawed “activities which cause damage to the road surface and infrastructure”. The latter includes examples such as protestors gluing themselves to roads.

Nevertheless, the latest round of protests all took place on this network, with the M25, M56 and A4400 affected. Previous Insulate Britain roadblocks have targeted the A40 in West London, a roundabout in Dartford, main roads in and out of the City of London, Dover docks and the Blackwall Tunnel, as well as the M1 and M4 motorways in and around London.

Transport Secretary Grant Shapps accused the group of “risking lives” and “ruining journeys”. Mayor of London Sadiq Khan, meanwhile, said housing insulation was an “important cause”, but that the methods Insulate Britain was using would only drive people away – he called on the group to stop its protests.

Do the police have powers to remove protesters?

At present, wilfully obstructing a public highway is an offence under the Highways Act 1980. Those found guilty can be given a maximum fine of £1,000.

Kent Police told Auto Express that when dealing with a human roadblock, officers will speak to protestors and determine how long they aim to continue. If disruption is planned for a few minutes, the police may wait it out, but longer protests have to be dealt with more actively.

The police have the power to remove protestors from the road and arrest them, but the challenge lies in ensuring no one is injured in the process. This is especially difficult when protestors physically attach themselves to surfaces or objects using glue, for example.

Do you agree with the protestors? Let us know in the comments below…