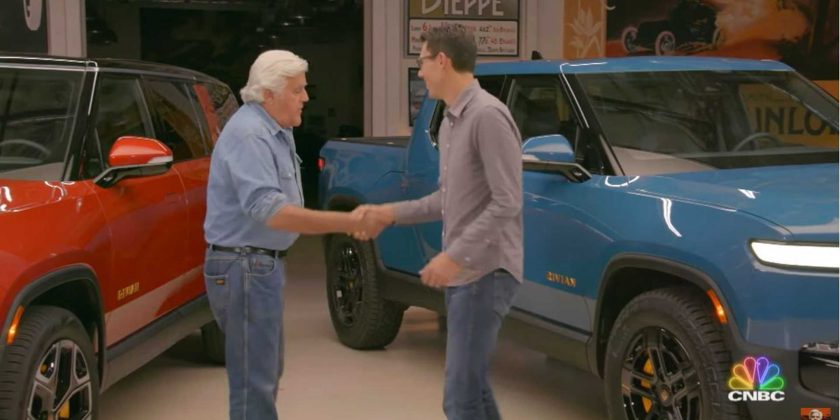 Jay Leno invited Rivian Automotive’s founder and CEO RJ Scaringe to visit his show Jay Leno’s Garage with the R1T electric pickup truck and R1S electric three-row SUV. Leno has certainly spent some time with the R1T, but this was his first time going over the new Rivian SUV in detail, and, of course, he got some time behind the wheel with Scaringe riding shotgun.

The successful comedian and talk show host is also an esteemed car collector. His garage is packed with icons from the past, present, and future, and many of them are gas-powered cars. If you’re going to be a successful collector capturing a glimpse of your favorite rides from yesterday and today, the gas car must be present.

That said, Leno has made it very clear for years that he’s an avid supporter of electric cars, and he’s almost certain they’re the future. He’s also a fan of Tesla and Elon Musk, another famous CEO that’s been on his show a few times, and he owns multiple EVs, including Tesla vehicles.

If anyone could have forecasted that electric car startups like Rivian would eventually follow in Tesla’s footsteps and find success, Jay Leno should probably be on the list. For this reason, it’s fitting that he’s taking the time these days to highlight these carmakers of the future.

Jay spends some time congratulating Scaringe for Rivian’s successes and learning a bit about the interesting company’s long history. RJ started the company 13 years ago, and it took plenty of decision-making and hard work to get it to where it is today. Though it certainly still has a long way to go, Rivian already employs some 14,000 people.

Scaringe wasn’t even sure Rivian (which had a different name and goals early on) would be an EV-only automaker. However, as EVs were finally becoming more popular, it was clear that there was a growing need for an electric truck and a family-friendly electric SUV. Rivian also decided to make these vehicles not only high-end and premium, but also durable and off-road-ready.

After talking for a time, the two head out onto the road in the all-new Rivian R1S three-row electric SUV. Like most of the vehicles that appear on his show, Jay gets the welcome opportunity for some time behind the wheel. And having the CEO right next to him at his disposal for questions and conversation adds to the magic.

Check out the video for many more details about Rivian and the R1S electric SUV. Then, scroll down to the comment section and leave us your thoughts. Is it the best three-row electric SUV on the market today? If not, which EV gets the win?