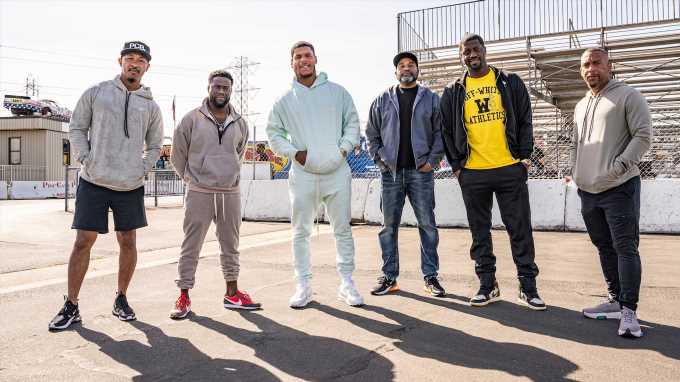 Kevin Hart has been a car enthusiast his whole life, and his closest friends and comedy crew-The Plastic Cup Boyz-are just as in love with cars. Namely, muscle cars. We’ve heard for years about Kevin’s impressive car collection, including a convertible Pontiac GTO and not one but two Mustangs—a 1965 Ford Mustang convertible and a restomod Mustang GT500E Super Snake making over 700 hp—along with a selection of Europe’s finest exotics.

Related: What you get on the MotorTrend App—over 8,500 episodes of world-leading automotive series including the all-new TOP GEAR AMERICA, the most complete collection of classic “TOP GEAR”, every season of SPEED RACER, ROADKILL, TEXAS METAL, HOT ROD GARAGE, BITCHIN’ RIDES and more. Sign-up today to start your free trial!

Now, The Plastic Cup Boyz want in on the action, and because everyone wants an awesome muscle car, they might as well start a car crew.

A bunch of comedians starting a car crew? This is going to be hilarious. No, seriously, they want it to be funny. Car collecting and customizing is a world of extremes: Finishing that long-term project or buying that dream car is the best day ever for most enthusiasts, but for every best-day-ever there’s a bad day somewhere else.

Kevin and The Plastic Cup Boyz—John Clausell, Ron Everline, Spank Horton, Harry Ratchford, and Joey Wells—want to explore the world of car collecting, to see what it’s really like to be muscle car devotees, all while starting a car club—and they asked MotorTrend to capture all the magic along the way. But we’re not going to let them flounder and struggle as they try to find good deals and build them into desirable collectibles—no way!

“Fans will have a ball experiencing this classic car journey through the eyes of Kevin Hart and The Plastic Cup Boyz,” said Alex Wellen, president and general manager, MotorTrend Group. “It’s a 101 course on everything we love about car culture with the hilarity and humility that only Kevin and his crew can bring to storytelling. “

Lucky Costa from HOT ROD Garage knows muscle cars and Southern California car culture. Before HOT ROD Garage, he wrenched behind the scenes on Overhaulin’, and he’s currently building an OBS 1988 Chevy 454SS with an LT4 and six-speed auto swap for another MotorTrend App star, Dax Shepard from the all new Top Gear America. He can also bust chops with the best of them and is known to cause a laugh or two on HOT ROD Garage. Who better to help Kevin Hart and The Plastic Cup Boyz navigate muscle car culture and wrench for them? We don’t think there’s a better choice.

Choosing a car, customizing it, racing it, flipping it—MotorTrend is bringing you along for all the internal debates, laughs, and adventures on the way. You might see Kevin Hart in everything nowadays, but there’s only one place you can watch him and The Plastic Cup Boyz live out all the muscle car dreams: the MotorTrend App, summer 2021.