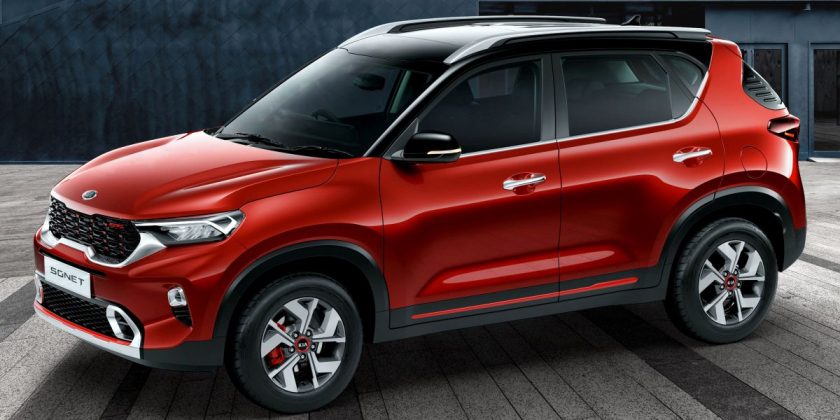 Kia is making a big splash in the Indian market – having only made its debut in the country with the Seltos last year, it is fast filling out its lineup with the introduction of the new Sonet. The tiny SUV, which was revealed six months ago as a concept, competes in the same space as the related Hyundai Venue, the Maruti Suzuki Vitara Brezza and the forthcoming Nissan Magnite in the A-segment.

The only changes make the car more suited for production, such as the larger door mirrors, conventional door handles and a slightly aggressive front fascia with projector fog lights. The 16-inch turbine-style wheels on this GT-Line model are also quite a bit smaller and narrower, but thankfully the car still features a stylish two-tone look in three colours (eight single-tone hues are also available). Inside, the Sonet looks like a mini Sorento, sporting vertical air vents and a freestanding infotainment and instrument display panel. The GT-Line enhances the look with a flat-bottomed steering wheel and lots of red stitching. Kia claims plenty of segment-leading features, including the first ventilated seats in the class, a 10-speaker Bose sound system and a 10.25-inch touchscreen for the UVO infotainment system.

Elsewhere, the Sonet features a 4.2-inch multi-info display, a cooled Qi wireless charger, an ambient lighting system that pulses to the beat of the music you’re playing, and a Smart Pure Air Purifier with virus protection. Clearly designed in response to the coronavirus pandemic, the latter consists of an N29 HEPA filter and an LED emitting ultraviolet C light, which Kia says is scientifically proven to kill viruses and bacteria.

In terms of powertrains, the Sonet is being offered with three Smartstream engine choices and a whopping five different transmission options. There are 1.2 litre four-cylinder and 1.0 litre turbocharged T-GDi three-cylinder petrol engines, plus a 1.5 litre CRDi turbodiesel mated to either a six-speed manual gearbox or a six-speed automatic. The latter is said to be a first in the segment. The other transmissions include a five-speed manual, a seven-speed dual-clutch transmission for the 1.0 litre turbo and the brand new six-speed intelligent manual transmission (iMT). This uses an electronically-operated clutch to engage the gears, but unlike in other markets, the Indian version does not feature a third pedal to give back some semblance of control to the driver.

Instead, the gearbox is fitted with an “intention sensor” that disengages the clutch when the gearlever is moved. It is programmed not to stall when in a higher gear at low speeds, and it comes with a rev control module to prevent the car from rolling back on a hill.

The Sonet is designed for the Indian market but has been earmarked as a global model, so could the car come to Malaysia in the near future? We’re still eagerly awaiting the arrival of the Seltos, so only time will tell. What do you think of the Sonet? Sound off in the comments section after the jump.