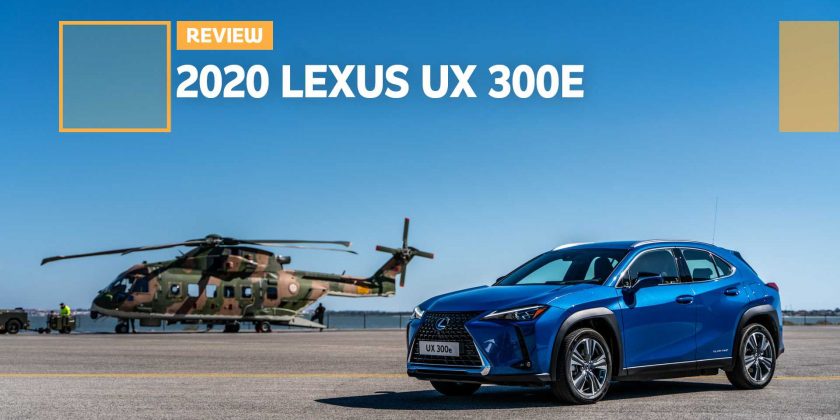 If its controlling brand had an EV in China, why not Lexus as well?

We have often written how air-cooled batteries are not a good idea for electric cars. A more robust management system is recommended to keep the battery pack going for more time. Yet, Lexus decided to have one in its UX 300e, which is now for sale in Europe. It was even kind enough to invite InsideEVs to have a first contact with the car at the Portuguese Airforce Base 6 in Montijo, close to Lisbon. It was a fast experience, but a telling one.

The UX 300e only exists because Toyota needed an electric car in the Chinese market. Its partners in China – GAC, and FAW – probably urged the company to have these options. So much so that the electric C-HR is sold there with this name and also as IZOA, as we mentioned a while ago: both companies wanted to sell an electric compact SUV.

The Lexus UX 300e most certainly was born as a result of that effort. Interestingly, all its units are made in Japan, not in China, as we previously thought. To be more specific, all UX 300e are made at the Kyushu plant, whether they are destined fort China or Europe. We asked Lexus how many units of the EV are produced there, but the company preferred not to disclose that.

Unfortunately, the UX 300e was built with a platform that did not predict more electrification than the hybrid versions it already offers. Making an EV with the TNGA (more specifically, with the GA-C) was an urge, not something planned. Part of that reality becomes very clear precisely due to its option for an air-cooled battery pack.

Lexus claims it chose this solution because it would make the car lighter. That may be true, but it would also be way less complex to build. In other words, easy to fit in a car that never meant to be electric in the first place. If air-cooling was the best option for a larger battery pack, the Toyota RAV4 Prime battery pack would not be liquid-cooled.

That proves Lexus and Toyota may just give a water-cooled battery pack to an entirely new car. Only that would justify the investments in its development. Solid-state batteries may save Toyota and Lexus of more of those costs and they are promised for 2025. On top of that, Lexus already has experience with air-cooled battery packs with its hybrid vehicles.

The Japanese company knows liquid-cooled systems are more trustworthy when it relates to the Li-ion batteries we have today. So much so that it decided to give the UX 300e a ten-year warranty for the batteries because people would be afraid to buy it without the certainty these air-cooled pack will not lose performance.

The Japanese luxury company ensures 70 percent of capacity until the end of these ten years. If the battery pack drops below that, it gets replaced for free. Even if air-cooling fails to preserve these cells, Lexus customers will have the peace of mind to not worry about that for a decade.

Another piece of evidence that the UX 300e was the best Lexus engineering teams could do with what they had available is pretty visible in the car – literally.

Unlike the UX 250h, the UX 300e shows a black structure that extends below the door sills. Lexus was competent enough to make the EV seem lower as if its ground clearance was shortened by a lower suspension. In the worst-case scenario, it could look like a weird piece of equipment. such as a misplaced roof rack. That visible black structure is the protection for the air-cooled battery pack, which also claims space inside the UX 300e.

Inside the SUV, the floor is low close to the sills and suddenly a sort of step forms a higher flat floor in the center. The UX 250h’s floor is flat and even from sill to sill. The good thing is that the luggage compartment is slightly larger (47 liters, to 367 l) because there’s no hybrid battery pack underneath it.

Having this larger battery pack adapted to a car that was not designed to have it brings an unpleasant side effect: placing your feet not much lower than your tighs. The image below shows how they are 5.4 centimeters higher than in a regular UX. The rear seat is just 1.6 cm higher, which makes the passenger have 1.6 cm less headroom.

Any passenger in the back seat that is not a child or a very short person will travel with their tighs mostly in the air, without support, which can be tiresome in long journeys. In the UX 300e, that is more likely if you get stranded in traffic than for running long distances.

The 54.3-kWh battery pack delivers a range of 315 kilometers under the WLTP cycle. In Portugal, that is almost exactly the distance between Porto and Lisbon. We’ll ask Lexus for a unit to make that trip. Could the UX 300e accomplish that without stopping?

If you use the electric SUV solely in urban traffic, that will increase the WLTP range to 413 km. Although they do not properly compete with each other, the Tesla Model 3 SR+ costs €48,900 in Europe and offers an estimated 430 km range. The UX 300e will cost €52,500 in Portugal, including taxes.

DC charging in the UX 300e uses CHAdeMO, but Lexus will also sell an adapter for CCS2 fast chargers. The Japanese company says it can cope with fast chargers of 50 kW or more and recover 80 percent of charge in 50 minutes if it is totally depleted.

Unfortunately, due to COVID-19 restrictions, we did not have time to test that, hence the need for a longer contact with the EV. We only drove it for 20 minutes and around 20 km inside Montijo’s Airforce Base. The terrain there is pretty plain, without climbs or descents.

Lexus made little tests to show how fast, stable, and maneuverable the UX 300e. The first one focused on acceleration in the Normal and Sport modes. You can select these driving modes in a knob on the upper right side of the dashboard.

What Lexus aims to offer with the UX 300e is a clean luxury compact EV and its engineering team has made the best of what it had to deliver that.

Considering electric cars are much more silent than combustion-engined counterparts, the UX 300e has a lot of deadening materials around the body, especially inside the wheel wells. What may seem so paradoxical actually makes a lot of sense: without the engine, all other noises become much more evident – and annoying – in an EV.

Lexus allowed us to drive on a gravel road and the silence the car presents is remarkable. You barely hear the little stones hitting the wheel well covers. When you do, it seems to be somewhere else, not in the car.

All components in the UX 300e are well fitted, with no visible finishing flaws. The places the driver and the passengers can reach are covered with soft-touch materials. As we already mentioned, tall people will only feel comfortable in the front seats, but electric adjustments for the seats and steering column make it easy to find the best seating position.

The other two exercises Lexus proposed to the journalists at the event were a slalom at 40 km/h and a tight circuit made of cones to show how easy the UX would move in a shopping center parking lot or in the narrow Portuguese streets.

The electric SUV did not have many opportunities to show how its low gravity center makes it a nice driving machine. On the other hand, the fact that it is based on a car that was not meant to be electric is evident in more aspects, such as the lack of a frunk even with the electric motor seating low.

A vehicle meant to be electric – or even made in a platform that predicted an EV, such as PSA’s e-CMP and Volvo’s CMA – would probably present Lexus in a more favorable light. Anyway, the UX 300e preserves many of the attributes that make a Lexus recognizable: impeccable finishing, strong build quality, luxury, and silence.

If you aim for an all-electric vehicle, love Lexus, and do not have kids – or they are too young to bother with the rear seats – the UX 300e may be a good option for your needs. Especially considering the ten years of warranty on the battery pack.