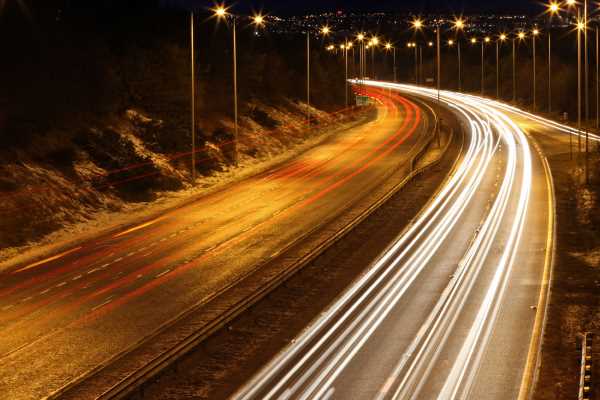 UK's largest police force, the Metropolitan Police, caught drivers travelling at speeds of up to 163mph during the UK's lockdown

The UK's largest police force saw a 71 per cent increase in the number of speeding drivers they caught during the coronavirus lockdown, new data shows.

The Metropolitan Police Service issued 3,282 Traffic Offence Reports (TROs) to drivers accused of breaking the speed limit in April 2020 – up from 1,922 in April 2019.

In addition, Kent Police and Derbyshire Constabulary recorded year-on-year rises of 53 per cent and 41 per cent respectively in the number of speeding drivers caught in the same period, according to figures acquired by the PA news agency via Freedom of Information request.

Although the majority of police forces who responded to the request actually recorded a decrease in the number of speeding drivers, 13 saw an increase in the speed of the fastest driver caught during the period.

Detective Superintendent Andy Cox from the Metropolitan Police told PA: "Early on, for some people driving at extreme speeds, they would be really surprised to see us there. They would actually come out and say 'we thought you'd be busy dealing with COVID'."

He added: "Maybe some people [tried to take] advantage because congestion was less and thought they'd get away with it."

Previously, official police data revealed some of the more extreme speeding incidents that have taken place on the quiet roads brought about by the coronavirus lockdown. One driver was caught at more than double the 70mph motorway speed limit, and 20 police forces recorded motorists in excess of 100mph.

A series of freedom of information requests to constabularies up and down the country found the worst officially recorded incidents were a motorist caught at 151mph on the M62 motorway by West Yorkshire police, followed by a 140mph speeder on the A14 in Suffolk. The data covers the worst speeding offences logged by 30 forces between 23rd March, when the lockdown was introduced, and 13th April.

Police forces across the UK have witnessed extreme speeding incidents, with Northamptonshire officers reporting a 138mph speeder on the M1, and Gwent police recording a driver travelling at 136mph on the M4.

While the West Yorkshire and Northamptonshire offences took place between 9 and 10pm, other offences occurred in the middle of the day. Officers in Kent spotted someone at 132mph between 4pm and 5pm, and Scottish officers caught a driver at 128mph in the early afternoon.

The most extreme cases took place on 70mph roads, but Derbyshire officers reported that one driver reached 108mph on a 40mph section of the M1, with Bedfordshire police catching someone at 104mph on a 40mph section of Airport Way, Luton, a road servicing hotels and car parks around the airport. Durham police, meanwhile, clocked someone at 44mph in a 30 limit, with 17,363 speeding incidents recorded nationally in 30mph zones.

The information was obtained by the RAC, which quizzed police over extreme speeding incidents. The RAC’s road safety spokesman, Simon Williams, called the extreme speeds “truly shocking”, adding that: “at such high speeds there is virtually no time to react should anything unexpected happen in front, such as a car changing lanes at the last second, or a vehicle having to brake suddenly.

“Clearly, some drivers have taken advantage of quieter roads to speed excessively putting the lives of others at risk at the worst possible time, but at the same time it’s encouraging that so many police forces have taken firm action even during the lockdown, which sends a strong message to other would-be offenders.

“While most of highest speeds recorded were on motorways, some occurred on roads with much lower speed limits, which is an even greater concern. The figures for speeding offences on 30mph roads are particularly worrying as far more people have been walking and cycling due to the lockdown.

“As some schools and nurseries in England begin to open their doors from this week there will be even more pedestrians on the roads so we urge every driver to obey the speed limit and keep all road users safe.”

Are you shocked by the speeding statistics during lockdown? Let us know your thoughts in the comments section…