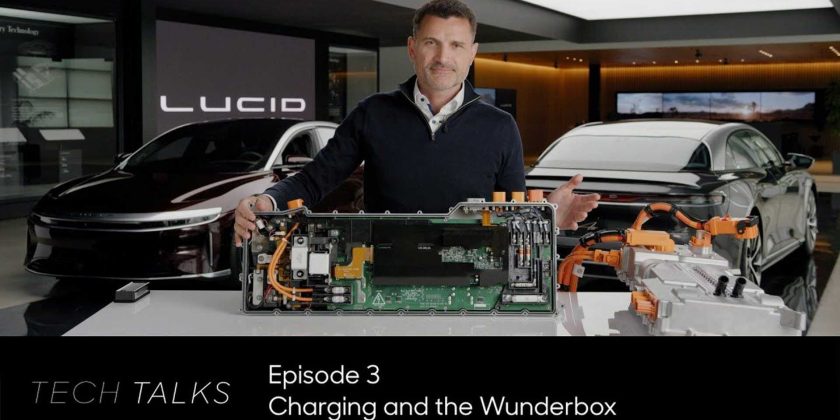 Lucid says that you should be able to charge the Air electric sedan so that it has 300 miles of range in just 22 minutes, a claim which we put to the test in our 0 to 100 percent DC rapid charging test, where it peaked at over 300 kW. The manufacturer is very proud of its on-board charger, which it calls the Wunderbox, which is why it basically dedicated an entire video to explaining how it works and why exactly it is so great.

Firstly, as explained by Eric Bach, Lucid’s Senior Vice President of Product and Chief Engineer, the Wunderbox is an integral part of the car’s chassis. It may be a charger, but it is designed to also function as a chassis crossmember that adds rigidity and improves safety. Bach also says that it also works to improve interior refinement, although we’re not really sure how it does that.

The Lucid Wunderbox charger is also capable of delivering up to 19.2 kW AC charging, which is quite good as far as AC charging goes, although it’s not quite the quickest on the market. Lucid also designed this charger with bidirectional charging in mind, so in the future the vehicle will also be able to deliver the same 19.2 kW to your home, or for any other application – they didn’t say when this feature would be implemented, but it sounds like the hardware is already there and it just needs an update to get everything enabled.

After watching this quite informative video from Lucid, make sure to check out our own Lucid charging video where we put the manufacturer’s claims to the test and the vehicle actually performed as expected, delivering a very good charging curve – we managed to charge it from 0 to 100 percent in just over 80 minutes from a 350 kW Electrify America charging station, a really good result.