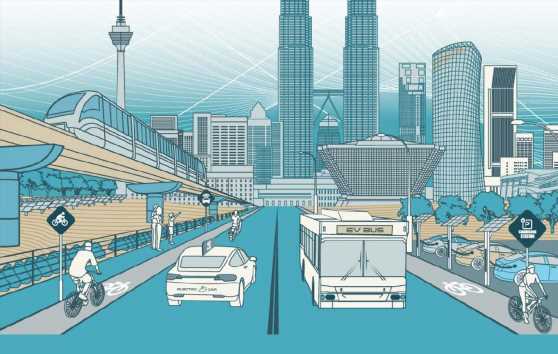 While the government has yet to officially announce its automotive electrification agenda for the country, ambitious plans look to be in store, if a study published by the Malaysian Green Technology And Climate Change Centre (MGTC, formerly known as GreenTech) is any indication.

The Low Carbon Footprint Blueprint, as the document is called, outlines recommendations by Kementerian Alam Sekitar dan Air (KASA) on various means to address emissions from the land transport sector, said to contribute around 20% of the country’s total emission levels.

The blueprint, which MGTC says was presented and accepted by the economic action council and national climate action council this month but remains in final draft and subject to Cabinet approval, highlights the aggressive approach to decarbonise land transportation over the decade heading into 2030.

The proposed policy contains four focus areas, 10 strategies and 45 action plans, and is wide-ranging, covering aspects of the reduction of greenhouse gas emissions and energy reduction via fuel economy and emission improvement as well as from the adoption of alternative fuels such as biodiesel, but we’ll take a closer look at the topic that is most relevant to us, regarding electric vehicle (EV) adoption. Many of the points outlined in the blueprint should be closely associated with that expected in the specific EV policy that will be put in place in the long-awaited revision of the National Automotive Policy (NAP 2020), and these provide a broader picture of what to expect, if timelines actually follow through and deployment of these strategies are executed as intended.

Mirroring that mentioned previously, the study stated that that the long-term success and sustainabilty of the strategy will need to include local manufacturing, maintenance capacity and infrastructure readiness, and that incentives are needed to bridge the price gap of EVs and kick-start adoption and catalyse local manufacturing.

It confirmed that battery EV (BEV)-specific incentives will be led by full excise duty and import tax exemption being given for the importation of completely built-up (CBU) units, as highlighted by Malaysia Automotive, Robotics and IoT Institute (MARii) CEO Datuk Madani Sahari when we spoke to him last month.

The study, however, reveals the exact number of CBU vehicles that will enjoy this tax relief, and the maximum has been set at 10,000 units, the exemption applicable until the end of 2022. From 2023 to 2025, CBU EV units will be given a 50% import and excise duty exemption, in what is a bridging measure until local EVs become available on the market.

As further cover, these EV incentives are also being structured with plug-in hybrid (PHEV) in mind, with the consideration of them being a necessary transition towards full battery EVs down the road. As such, PHEV-specific incentives will also be introduced. These include tax exemption for qualified CKD models, with 100% exemption being given until 2022, 75% exemption from 2023 to 2025, and 50% exemption from 2026 to 2030.

The rest will then come with the formation of private EV charging operators. A public tender for a national fast charging network is planned, and the study also proposes that tax incentives will be provided under Green Income Tax Exemption (GITE) for such services until 2030. In areas not serviced by private operators, it calls for the installation of a fast charger for every 100 km and at every R&R stop along major highways, commencing from next year until 2025.

Elsewhere, new requirement guidelines for installing EV charging facilities will be incorporated in planning permission for all new buildings, and a tariff revision for public EV charging services will also be studied before the specific rates are implemented. However, no details were given.

Meanwhile, government-led initiatives include plans to push EV (presumably both BEV and PHEV) adoption for taxi use as part of the modernisation process for such services. Incentives for the purchase of EVs and income tax exemption until 2030 are being proposed to offset the higher capital cost of EVs.

The blueprint also lays out adoption of BEVs for use in government and GLC fleets as a means to encourage wider adoption. The idea is to get 10% of new additions to the fleet to be BEVs by next year, increasing this percentage to 20% in 2023 to 2025.

The last will similarly be adopted for GLC fleets, with tax incentives being provided until 2030. From 2026 to 2030, 50% of the new additions to government and GLC fleets are targeted to be locally-manufactured BEVs, giving an indication of when the government expects that CKD of BEVs will begin to come into play.

The electrification action plan aims to grow localisation through providing R&D grants and support for local manufacturers of electric vehicles. Presently, there are no dedicated tax incentives for investment in “green” production and distribution activities, and the plan is to introduce a tax incentive scheme for industries in the production, distribution and services related to low-carbon transporation.

Buses and motorcycles are also set to feature in the move towards electrification, with plans to establish an e-bus central procurement agency, offering subscriptions to ministries and state governments. This will have a revolving fund of RM450 million for competitive leasing as well as a RM100 million annual fund. Support will also be given to manufacturers of local EV buses.

As for electric motorcycles, support will also be provided to local manufacturers, and it has been proposed that tax incentives be given to operators purchasing these for use as delivery service vehicles. There is also a plan to develop a battery swapping standard for e-bikes and have it in place by 2023.

It is not known how much of that proposed in the blueprint will be detailed in the specific EV policy, and it remains to be seen as to whether all the incentives mentioned will happen and, more importantly, be transparent or hidden behind a customised veil. The answers, in due course.