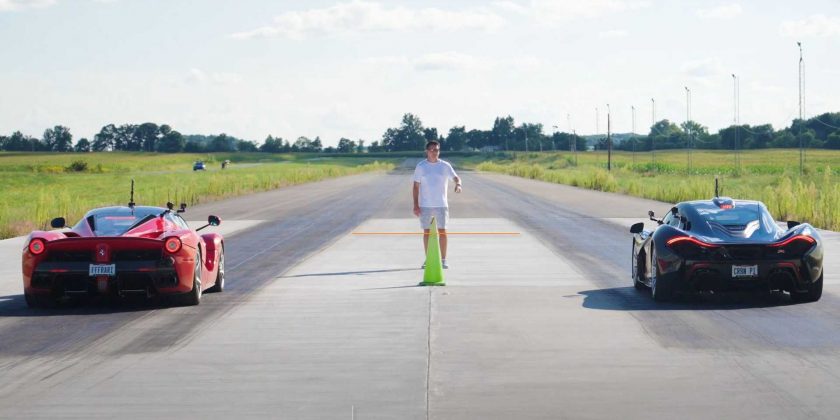 We’ve seen a number of drag races among supercars on this website, but a McLaren P1 versus Ferrari LaFerrari. It’s ultimate versus ultimate, the pinnacle of what both supercar makers can do in terms of automotive engineering and application of hybrid systems in performance vehicles.

And that’s what The Triple F Collection has here – a drag race between the P1 and the LaFerrari, with Brooks from DragTimes as a guest driver. It was a normal day for supercar content for both YouTube channels… until one of the cars broke down in the middle of the shootout. During the second race, the McLaren P1 halted just right after launching.

Onlookers from the outside noticed something unusual just as the McLaren P1 was changing from first gear. This was followed by a thin white smoke coming out the rear of the British supercar, which tells us that there is definitely something wrong within the engine bay.

Brooks, on the other hand, said that the car said “Clutch Overheat” (presumably) on the instrument panel. He said he let go of the gas just as soon as he noticed the warning. We don’t know what exactly happened with the P1 here but what we’re sure of was this isn’t going to be a cheap repair given the complexity of this vehicle

But at least one race was completed between the P1 and the LaFerrari. On that run, the  903-horsepower McLaren won against the 950-hp Ferrari, beating the Italian supercar with a substantial gap at the line. At least, there’s one race that settled the score between the two hybrid supercars.

Had the race continued with three rounds, which do you think would have won the contest? Let us know your thoughts in the comments section below.