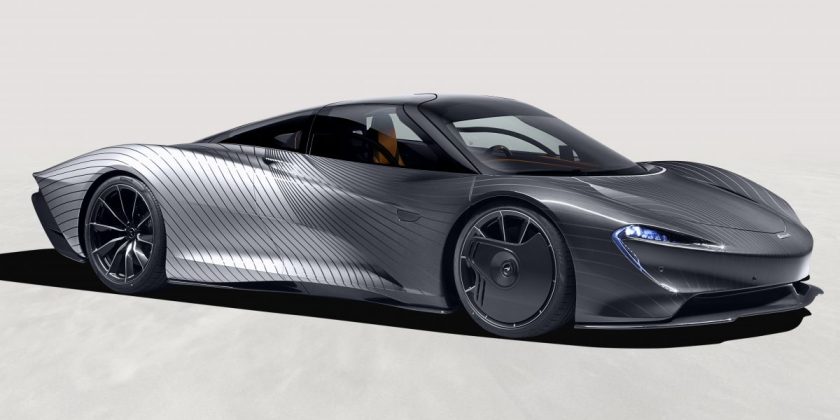 McLaren has unveiled the one and only ‘Albert’ Speedtail, a bespoke commission by North American McLaren retailer, McLaren Beverly Hills. The Albert is one of the last Speedtails to be made (only 106 will be produced), and pays homage to the 1992 McLaren F1 test mules which were called Albert.

One of the earliest Speedtail prototypes was also fittingly named Albert, developed to validate the concept of its central seat driving position, testing driver ergonomics and visibility, as well as rear-view camera positions. The Albert prototype was also the first Speedtail to be driven on public roads, and it was built using the front panels from a 720S.

Now a complete track and roadworthy car, the Albert Speedtail is finished in Magnesium Silver and Ueno Grey. The silver shade is the same paint used on the F1 at the 1992 Monaco Grand Prix, whereas the grey is the colour of the F1 GTR that won the Le Mans race in 1995. MSO took 12 long weeks to complete the paintwork design due to its complexity, which included two weeks of masking, six weeks to paint, and the remaining time for drying and reassembly. The livery masking was done by two specialist paint technicians, who worked on the completely built car – with wheels fitted – to ensure accurate cross-panel alignment of the design. They used nearly two kilometres of masking tape to complete the initial design layout.

The ‘Albert’ Speedtail will make its public debut at Sunset GT, a luxury cars and coffee event hosted by O’Gara Beverly Hills. The event takes place on August 8, 2021 in Sunset Plaza, Los Angeles.

MSO managing director, Ansar Ali said: “The name ‘Albert’ has a special resonance with MSO, as we are the custodians of the McLaren F1 and are based at the Albert Drive premises that McLaren Cars occupied in the 1990s.”

“The Speedtail experience has been an exciting journey for our customers, from visualising their imaginations to realising these inspirations and sharing their delight when unveiling the finished product. ‘Albert’ brings this project to a conclusion and we are thrilled to finish on a high note,” he added.

To briefly recap, the Speedtail is the quickest McLaren road car to date. The teardrop-shaped hypercar is powered by an electrified 4.0 litre twin-turbo V8 that puts out 1,070 PS and 1,150 Nm of torque, and it weighs just 1,430 kg dry.

McLaren said the Speedtail takes only 12.8 seconds to reach 300 km/h from standstill, and will top out at 402 km/h in a special Velocity drive mode (lowers ride height by 35 mm, retracts external cameras and optimises rear ailerons to minimise drag). At 402 km/h, the Speedtail covers a staggering 112 metres per second!