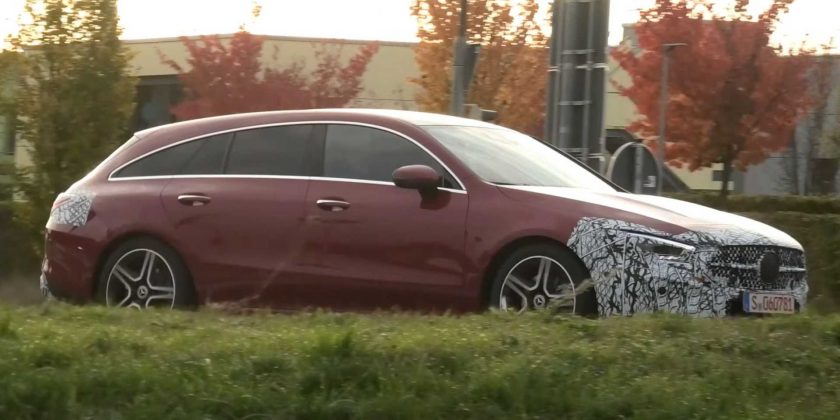 It was only in 2019 when Mercedes-Benz introduced the second generation of long-roof CLA at the Geneva Motor Show. However, the CLA Shooting Brake is already getting a facelift, and recent sightings just confirmed that it’s something to watch out for in the months to come.

Courtesy of YouTube’s walkoARTvideos, the facelifted CLA Shooting Brake was spotted while casually cruising on a public thoroughfare. And just like the previous sightings, the prototype came with concealments that try to hide whatever minor changes are to befall the long-roof coupe.

The front and rear fascias of the refreshed CLA Shooting Brake will get the heft of the changes. We don’t expect much deviation on the grille but we’re counting on a reformed front bumper, particularly in the inlets to keep the design fresh. There could be tweaks on the headlight graphics, though, and they’re well covered on the prototype seen above.

Meanwhile, the rear end adapts the same minor camouflage wraps around the taillights. Again, there could be tweaks on the graphics but nothing we could pinpoint at this point. In the prototype caught by walkoARTvideos, the bumper and the diffuser were also covered, unlike the ones we saw back in August.

Inside, tech changes are also expected but exact information is scarce at this point. The automaker’s latest version of its MBUX infotainment system is expected to make its debut in the facelifted models.

Under the hood, it’s likely that Mercedes will employ the same upgrades seen in the recently refreshed A-Class Hatchback and Sedan, together with the hotter AMG derivatives. That means the current turbocharged 2.0-liter inline-four engine will be carried over to the 2023 model year but with additional oomph coming from a mild hybrid powertrain setup.

We expect Mercedes-Benz to unveil the facelifted four-door and five-door CLAs toward the end of the year, so that’s something to watch out for in the weeks/months to come.