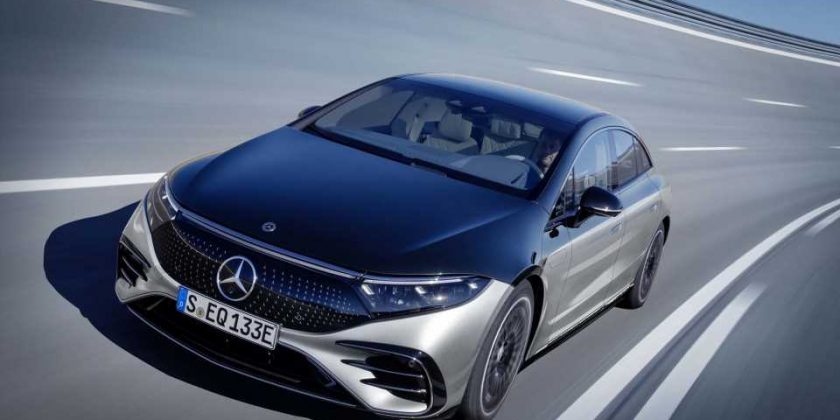 Mercedes-Benz joins the chorus of automakers pledging a future of electric vehicles, but with a timeline ramped up to occur this decade, the automaker disclosed Thursday. By 2025, the brand will launch three flexible electric vehicle platforms that will underpin a full lineup of battery electric vehicles by 2030. Even the AMG performance brand plans to discontinue the internal combustion engine.

The first of the three electric vehicle platforms to launch, dubbed MMA, will be for compact vehicles. Mercedes says it will be the last platform designed for both electric vehicles and internal combustion engines. The German brand has invested about $47 billion to build its vehicles, battery packs, motors, and charging infrastructure, which will all be supplemented by current and future partnerships.

To showcase its EV strategy, the brand developed the Vision EQXX concept with a 621-mile range. It uses the same batteries in the brand’s production vehicles, such as the 2022 EQS flagship sedan. The eventual successor to the S-Class, the EQS is a technology showcase on wheels powered by a 108-kwh battery pack on a 400-volt architecture that is expected to travel more than 400 miles on a single charge. Like the S-Class, it will come in several variants with rear-wheel drive or available all-wheel drive.

Mercedes is the latest automaker to define plans for an electric vehicle future in the near term.

Late in June, Honda disclosed plans to electrify its lineup with a portfolio of battery electric vehicles (BEV), hybrids (HEV), mild hybrids, and plug-in hybrids (PHEV). Honda is targeting 40% of its U.S. sales to derive from BEVs and hydrogen fuel cell vehicles (FCEV) by 2030. The 2024 Honda Prologue electric SUV will lead the charge.

A luxury-leaning electric SUV will wear Acura’s badge, but the name of that model has not been disclosed. Both models will use GM’s Ultium battery packs with large format cells that could lead to 400 miles of range. Even though Honda doesn’t sell or make an electric vehicle now, and it just announced plans to discontinue the Clarity fuel cell and plug-in hybrid vehicles, the Japanese automaker says its lineup will be fully electric by 2040.

But traditional hybrids that supplement a gas engine remain the interim strategy.

“Why invest in hybrid vehicles? We believe it is the best pathway to a zero-emission future,” Dave Gardner, executive vice president of Honda North America, said in a statement.

The best pathway would seem to be more electric vehicles like the Prologue. Currently, Honda sells hybrid variants of the CR-V compact crossover, the Accord mid-size sedan, and the Insight compact sedan. With the end of the Clarity, Honda will sell no vehicles with a plug until 2024.

Yet its ambitious plans have been echoed by other automakers. Earlier in June, Mazda and Lincoln announced plans for their first battery electric vehicles as well as making commitments to electrification across their lineups.

In February, Ford promised that electric vehicles would be fundamental to its Lincoln luxury brand following a $22 billion investment in electrification through 2025 across both brands. Then Ford debuted the 2022 Ford F-150 Lightning electric version of its bestseller, the 2022 E-Transit electric cargo van, and a fully electric version of the Explorer three-row crossover SUV.

Lincoln will launch its first battery electric model for 2022 to head the vanguard of Lincoln’s electrified portfolio by 2030. Lincoln already sells plug-in hybrids variants under the Grand Touring trim on the Aviator and (soon) the Corsair.

Lincoln announced plans for four fully electric vehicle arriving in the next few years. Ford developed two electric vehicle platforms, one for crossovers, SUVs, and small trucks, and a second for larger, body-on-frame trucks. Lincoln expects half of its global volume to come from battery electric vehicles by 2025, with hybrids, plug-in hybrids, and some remaining gas models rounding out the other end of the forecast.

Until now, Mazda appeared reluctant to commit to electrification, likely to the high development cost for a relatively small automaker. Now that it partnered with Toyota in the Mazda Toyota Manufacturing plant in Huntsville, Alabama, things could change. Earlier this year, it launched its first battery electric vehicle, the 2022 Mazda MX-30, but it will be limited to California.

Mazda plans a dedicated EV platform by 2025, while electrified models begin filling in big gaps in the Mazda lineup, which currently lacks even a hybrid model. Between 2022 and 2025, Mazda plans to launch five hybrids, five plug-in hybrids, and three BEVs globally. By 2030, Mazda expects its lineup to be fully electrified.

Other automakers have expressed similar ambitions.

In January, General Motors pledged a goal of “aspiring” to eliminate all tailpipe emissions from passenger vehicles by 2035. GM CEO Mary Barra also announced a plan for the company to achieve net-zero carbon status by 2040, including emissions from its factories.

The world’s third largest automaker is not alone. Startup American carmakers such as California-based Tesla paved the way for traditional automakers like General Motors to grasp that electric vehicles can be profitable, sustainable, and embraced on a mass scale by car shoppers. Truckmaker Rivian, with a plant in Illinois, plans to produce and deliver the much anticipated R1T electric pickup truck and R1S SUV.

Electric carmaker Polestar—an offshoot of Volvo—started deliveries of the Polestar 2 electric fastback sedan this year, with more models to follow. Volvo pledged in 2019 to make half of its global sales electric by 2025.

Toyota, which just regained the title for world’s largest automaker and has long been the leader in hybrid powertrains, pledged in August that by 2025, its global sales will feature 50% electrification, which includes hybrid, plug-in hybrid, full battery electric, and fuel-cell electric vehicles.

In May 2020, Volkswagen, the world’s second largest automaker, invested $37 billion in its electric car program, with the intention of making 28 million electric vehicles by 2028. Tesla, the world leader in EVs, sold just below 500,000 models in 2020; that’s the same number of ID.4 electric crossovers Volkswagen aims to sell annually by 2025. Production delays might push that target back.

BMW and other automakers have committed to electrification and electric vehicles.

Automakers often signal ambitious plans based on the prevailing winds. In November, after the outcome of the U.S. election signaled Donald Trump’s loss, GM did an about face on its support of the Trump administration’s lawsuit against the state of California to keep it from setting its own fuel economy and emissions regulations. Toyota had also been backing the Trump administration’s action against California.

President Joe Biden has committed the U.S. to rejoining the 196 nations of the Paris Agreement on climate change. The agreement pledges to reduce greenhouse gas emissions attributable to climate change, such as the carbon dioxide caused by internal combustion engines. Biden has promised to electrify the government’s vehicle fleet.

There are many other considerations for the 10-year-old EV market, including ramping up electric charging infrastructure in both rural and urban areas and satisfying American tastes for large vehicles with electric choices. But the collective commitments pledged by automakers prove this is much more than a trend.