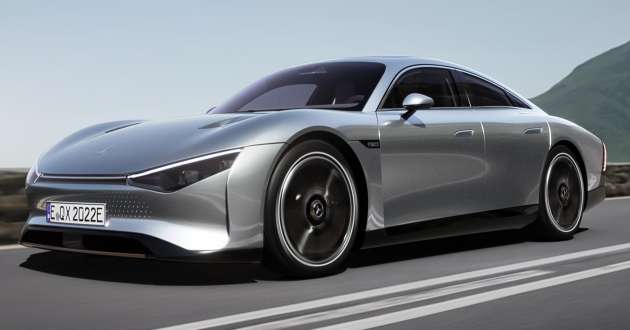 After what seemed like an eternity (it was actually a year and a half), Mercedes-Benz has finally debuted the Vision EQXX, an experimental prototype designed to push the boundaries of electric vehicle efficiency. The company has released all of the headline numbers, and they are phenomenal to say the least.

The goal was to deliver increased range without consequently upping the battery size by making the car more efficient, feeding into the virtuous cycle of continuous weight reduction and allowing the EQXX to travel further with less battery. And boy, have they done it – despite having a similar battery capacity as the EQS at less than 100 kWh, the EQXX has a staggering range of over 1,000 km according to simulations.

Mercedes achieved this spectacular figure by reducing the energy consumption to under 10 kWh per 100 km (or if you prefer, more than six miles or nearly 10 km per kWh). It starts with a slippery teardrop-like shape that has a drag coefficient of just 0.17 (lower even than the EQS’ 0.2 Cd), which Stuttgart says is more aerodynamic than an American football.

Key to this is the small frontal area (smaller than that of the CLA), which features a slim air intake and a flat Three-Pointed Star badge and bumper motif to maximise aerodynamic efficiency. Twin vents duct the cooling air over the bonnet rather than under the car to reduce interference drag around the wing mirrors, while the air curtain inlets on the bumper corners work with the wheel covers to eliminate airflow separation. 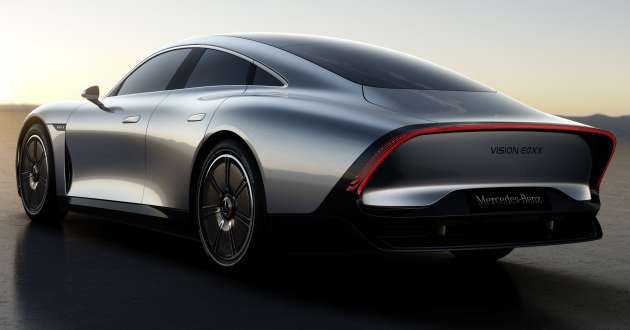 The sleek body and glasshouse taper towards the rear of the car, resulting in a rear track that’s 50 mm narrower than the front. This culminates in the sharp cutoff at the rear of the car, emphasised by the gloss black trim and curved full-width taillights. The large rear diffuser extends outwards at higher speeds to reduce drag but retract immediately in the event of a rear-end collision.

Although the EQXX was designed for efficiency first, there are a few embellishments worked into the body. The front end features a full-width light bar typical of Mercedes’ EQ models, with the projector headlights also featuring the Three-Pointed Star graphic in the daytime running lights – a feature that will make its way to future models, along with the two-dimensional Tristar bumper pattern.

The double-spoke forged magnesium wheels measure 20 inches in diameter and feature rose gold detailing on the centres and covers, mirroring the accents on the front splitter and rear diffuser. They are wrapped in ultra-low-rolling-resistance Bridgestone Turanza Eco tyres that incorporate the Japanese tyre maker’s Enliten and ologic technology.

Another area where Mercedes has squeezed the maximum out of its components is the electric powertrain, with a claimed energy efficiency of 95% from the EQXX’s 150 kW (204 PS) unit. The drive unit, which consists of the motor, transmission and power electronics, was developed in conjunction with the eight-time Formula 1 championship-winning Mercedes-AMG High Performance Powertrains (HPP) in Brixworth – in fact, the power electronics unit is based on the one off the AMG One hypercar. 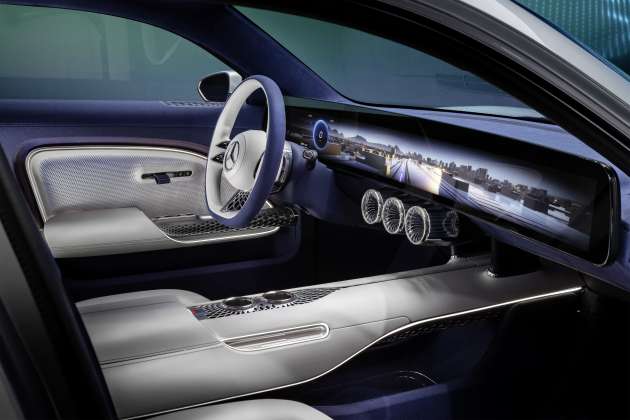 “We worked on every part of the system to reduce energy consumption and losses through system design, material selection, lubrication and heat management,” said electric drive system chief engineer Eva Greiner. “And our fantastic simulation tools helped us find out quickly what works and what doesn’t.”

The battery was also jointly developed with HPP and is half the size and 30% lighter than the one in the EQS, allowing it to be packaged into the smaller EQXX. The high energy density of 400 Wh per litre comes courtesy of an increased silicon content in the more advanced anode composition, greater integration and the separation of electric and electronic components. The battery is rated at 900 volts, incorporates a lightweight lid made out of sugar cane waste reinforced with carbon fibre, and weighs around 495 kg.

Elsewhere, the EQXX features an advanced thermal management system that preserves thermal energy and significantly reduces cooling drag. It’s small and lightweight thanks to the minimal waste heat generated by the drive unit and takes advantage of the carefully balanced interaction between the active grille shutters, coolant valves and water pumps. The cooling plate is located under the floor of the car and is cooled by the airflow underneath, enabling the car to travel 20 km further in its most aerodynamic mode. 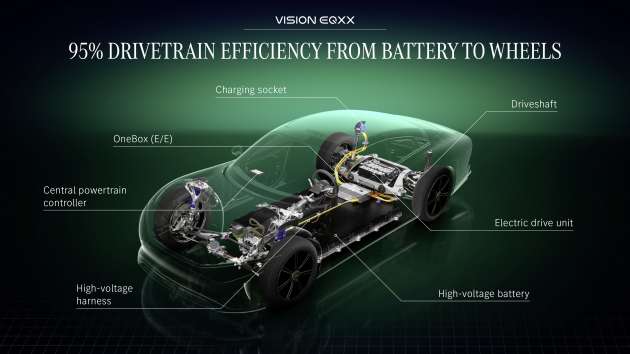 The heat pump also uses both waste electric heat and the ambient air to heat the cabin, a first for the brand that helps boost range in colder climates; it even uses heat from enthalpy at the evaporator, caused when water vapour is turned into a liquid. In hotter regions, the solar panel on the roof charges a separate lithium-iron-phosphate battery used to power the air-conditioning blower, lights, infotainment system and other ancillaries, boosting range by as much as 25 km in ideal conditions.

Weight is another enemy of efficiency, so the EQXX has been constructed to be as light as possible. Engineers took plenty of inspiration from Mother Nature, including for the single-piece BIONEQXX rear floor, currently the largest aluminium structural casting ever produced by Mercedes.

This component uses material only where necessary on load-bearing paths, creating a web-like structure that is protected using 3D-printed patches from UBQ Materials, made from recycled waste that would otherwise have ended up in landfills. Overall, this practice saves weight by between 15 and 20% over a conventional component and helps the EQXX achieve a kerb weight of around 1,750 kg.

The EQXX also marks Mercedes’ first use of MS1500 ultra-high-strength martensitic steel, as well as flat steel made from 100% scrap metal. A mix carbon fibre and fibreglass was used in the doors, reinforced with aluminium and a new polyamide foam. The brake discs, meanwhile, are made from aluminium and shave a significant amount of weight and brake dust compared to steel rotors. The springs are also made from fibreglass.

Inside, the EQXX features the first single-piece full-width display – an 8K mini-LED panel that spans 47.5 inches from A-pillar to A-pillar. The infotainment system that runs the screen incorporates a star-cloud avatar (inspired by Mercedes Jellinek, the source of the brand name) and 3D navigation (the first for a screen of this size).

The rest of the cabin features a futuristic design and takes sustainability to a new level. The faux Mylo leather, for instance, is made from the mycelium of mushrooms, while Deserttex leather produced from pulverised cactus fibres combined with bio-based polyurethane is also used. Textiles made from recycled polyethylene (PET), bamboo fibres and Biosteel faux silk can be found elsewhere in the cabin, as can Dinamica microfibre used in many Mercedes models – this time made from 38% recycled PET.

As per the new S-Class, the EQXX gets a “4D” surround sound system, but one that has again been redesigned to reduce energy consumption. The speakers have been made smaller and positioned closer to the occupants’ ears to prevent distortion and include headrest-mounted units. Bass exciters continue to be fitted on each seat to allow passengers to “feel” the music.

Mercedes says the EQXX was developed in double-quick time, using digital development tools and virtual testing to shorten the lead time to just 18 months. While the car won’t make it into production, much of the learnings are already being integrated into future vehicles, including compact and midsize electric models built on the Mercedes-Benz Modular Architecture (MMA).