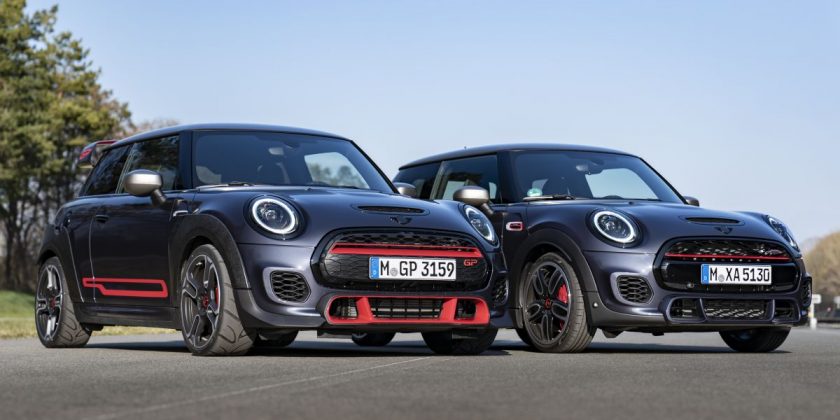 The MINI John Cooper Works GP is the most performance-focused model to emerge from the British marque, with 306 hp and 450 Nm from its turbocharged 2.0 litre inline-four petrol engine and eight-speed auto packaged in a three-door body that trades rear seats for additional cross-bracing.

The JCW GP limited to a run of 3,000 units, though, which means not all who have the means might join the queue in time for the hardcore two-seater hot hatch. For those who want the looks of the top-end GP variant in the more readily available series-production 231 hp/320 Nm John Cooper Works model that can be had in manual and automatic forms, MINI is offering the GP Pack.

Here, the GP Pack for the John Cooper Works three-door consists of a Racing Grey metallic exterior paint finish along with Melting Silver metallic contrast colour for the roof, and these are joined by a John Cooper Works rear spoiler and side mirror covers, while engine bonnet scoop, door handles and fuel filler lid are finished in black. Wheels are 18 inches in the John Cooper Works Cup Spoke design, with GP centre caps. Piano black trim is employed for the headlamp surrounds as well as the inner sections of the headlamps, tail lamps, MINI logo on the bonnet and tailgate as well as the door entry strips with GP logos. What the GP Pack doesn’t get from the two-seater are the carbon-fibre reinforced plastic (CFRP) aero wheelhouse extensions. Inside, the standard four-seater MINI three-door interior gets the GP flavour as well.

John Cooper Works sports seats in a Leather Dinamica finish with GP badging, while the John Cooper Works steering wheel is trimmed in Walknappa leather, features red stitching and a 3D-printed metal 12 o’clock marker. When the eight-speed automatic gearbox is specified (a six-speed manual is standard), shift paddles are 3D-printed with the GP logo.

The John Cooper Works GP Pack will be a factory-fitted specification for the three-door MINI from July 2020. As for the hardcore two-seater version that inspired the GP Pack, it has arrived in neighbouring Thailand for the princely sum of 4.2 million baht (RM563,453), where 30 units have been allocated.