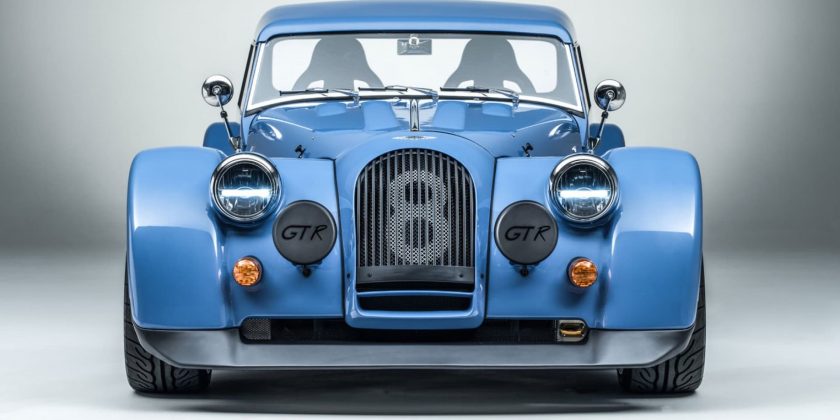 If there was ever a tweed-clad automotive manufacturer, it was staid Morgan. You wouldn’t know it by looking at the “new” Plus 8 GTR. This almost looks like one of those tongue-in-cheek renderings that puts a Rocket Bunny body kit on a vintage E-Type, just for laughs. But Morgan is very serious about this one, and it’s less about laughs and more about thrills. The GTR is the single most powerful Morgan ever built.

That said, it packs a mere 375 hp—plenty for the car, which weighs 2,400 lbs or so in non-GTR form. But wait, you might ask, isn’t the Plus 8 out of production in 2018? It is, and the GTRs—there will be only nine of them—are only coming into being because there were that many rolling chassis laying around.

Morgan decided to make these zombie Plus 8s into something very special, albeit highly customizable by the buyers. All are more powerful than the erstwhile Plus 8, though, with improvements to the engine tune and a barkier exhaust with twin exits.

You’ll notice some departures from recent Morgans, like a high-cut door rather than the cut-down, swoopy variant found in most other models. The very modern-looking five-spoke wheels are actually centerlock arrangements, and the large front splitter is all business. The inside looks almost like something found in a modern Radical or Lotus, if you don’t look too closely at the archaic center-mounted gauge arrangement.

Interestingly enough, the wild looks of the Plus 8 GTR have precedent within the company’s creations. “Big Blue,” a famed factory racer from the 1990s, sported a very similar look, with modern wheels, a huge rear wing, and a fixed top.

Like many semi-bespoke creations of a limited run, the customers have had a huge amount of input in these vehicles. Don’t expect the subsequent eight to resemble this one’s Yas Marina blue paint and its particular details. But all will share its performance potential.