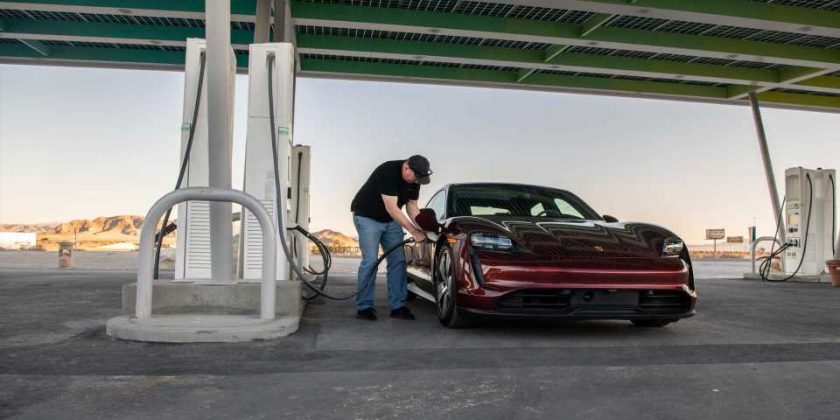 Most electric vehicles on sale today run on 400 volts, but that may change by the middle of the decade, according to one report. Right now, only a handful of automakers, namely Audi, Porsche, Hyundai and Kia, which have entered a partnership with Rimac Automobili, are the only ones selling EVs that run on an 800-volt architecture. The only exception is the Lucid Air that has a 900-volt architecture created with proprietary tech.

Running on such a high voltage gives all these EVs unmatched charging speeds and lower charging times that make them attractive for potential buyers. All the vehicles sold by the aforementioned established manufacturers can potentially charge at 350 kW, but currently none of them do and again the Lucid is the odd one out.

The Porsche Taycan peaks at a claimed 270 kW (around 260 kW peak in our own charging test), while the Kia EV6 tops out at 240 kW (we saw 233 kW during in our charging analysis). The Lucid Air may go up to a claimed 350 kW, but during our own testing, it only just nudged past 300 kW – that is impressive and it makes the Air the fastest-charging EV ever and also the fastest we’ve ever tested.

But things won’t stay like this for long, according to this report published on Automotive News. Industry supplies are already working on 800-volt technology, which they plan to start offering to automakers as of 2025. It quotes Dirk Kesselgruber, the boss of the electric drivetrain division of GKN, a major automotive industry supplier, as saying

In 2025, the majority of applications coming into the market will be 800 volt.

We think it’s going to be the mainstream, and Hyundai has proved that it can be competitive on price.

Putting everything together, 800 volt is a really big deal.

According to the source, this is confirmed by another high ranking industry official, Alexander Reich, head of innovation power electronics at Vitesco, as well as BorgWarner, whose chief technical officer, Harry Husted, said that

The 800-volt sector has grown faster than was expected several years ago, and we are seeing a lot of interest from our customers.

The obvious advantage offered by 800 volts is a theoretical 50 percent reduction in the time it takes to get energy into the battery. Alexander Reich explains simply that

By doubling the voltage and having the same current, you get two times the energy into a vehicle. There is no need for 1,000 km of range in an EV if charging times are fast enough.

It seems there is a consensus both among automaker and suppliers that the future of EVs is 800-volt, although some manufacturers are looking at battery swapping as a means to cut wait times for EV owners. But if in the not too distant future, you will be able to put meaningful miles back into your EV in the same time it took you to fill up, then even battery swapping will be unnecessary…