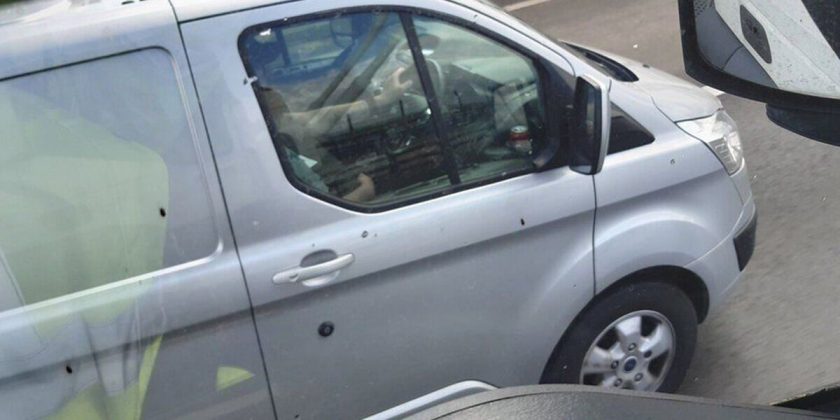 The motorist was handed a £100 fine after she was caught by the undercover truck police. The 23-year-old was among dozens of offenders caught by police using an unmarked HGV to identify illegal driving.

The woman was also given three points on her licence after officers caught her travelling across the southbound M90 Queensferry Crossing near Edinburgh.

Police Scotland’s traffic officers have been using an unmarked lorry cab as part of Operation Tramline.

The operation has previously caught thousands of offenders in other parts of the UK.

It began in late April this year.

Since then, 36 drivers have been issued with warnings and 85 punished for a variety of offences.

The majority of these (47) have been for using a mobile phone while driving.

They include one truck driver caught steering with his forearms while using both hands to operate his phone.

He was fined £200 and received six penalty points.

Other offences identified by officers in the truck included speeding, driving without insurance, and failing to wear a seatbelt.

Road policing officer Tom Aitken said: “Most people know the effect alcohol and drugs can have on driving, but the small things can be overlooked.

“It is just not smart eating as you are driving, it is downright dangerous.

“The same goes for using any mobile device and reading.

“Acting like this means you are distracted and therefore not in proper control of your vehicle.

“A split-second lapse in concentration could result in a crash.”

Operation Tramline and other similar schemes have previously operated in several parts of England.

As part of the exercise, officers have used the elevated view offered from the “supercabs” to identify illegal behaviour.

More than 21,000 drivers have been caught as part of the operations.

The most memorable cases among them included a truck driver being spotted letting go of the steering wheel so he could hold a phone to each ear.

Another motorist was seen steering with his knees while he ate and used a mobile phone at the same time.

Roads officer Tom Aitken added: “Reducing the number of road casualties is a priority for Police Scotland and we are always looking at ways to enhance our ability to investigate road traffic offences.

“The HGV enables officers to have a good view of drivers and what they are doing.

“It is another tool we are using to make Scotland’s roads safer.”