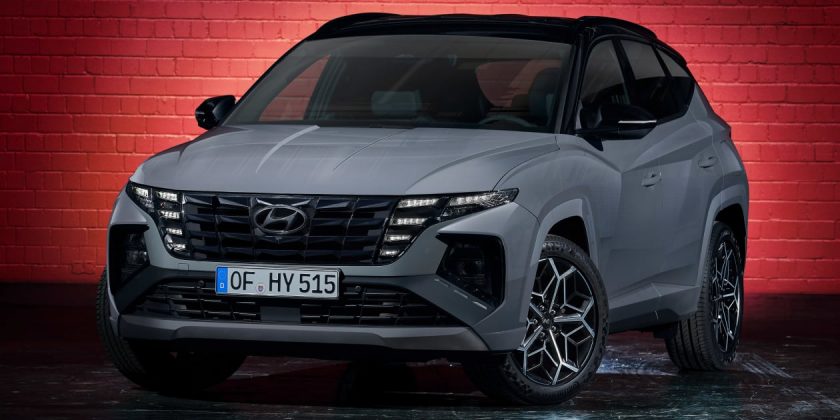 Hyundai has launched new hybrid and plug-in hybrid versions of the Tucson N-Line, with prices starting from £34,900 and £39,330 respectively. The new engines will go on sale in the UK later this summer.

Both new models are powered by the same turbocharged 1.6-litre four-cylinder petrol engine, just with differing levels of electrical assistance.

The full hybrid option has a 59bhp electric motor and 1.49kWh battery pack, for a maximum output of 227bhp and 350Nm of torque. Hyundai says the hybrid powertrain gives the Tucson a 0–62mph time of eight seconds flat and a top speed of 120mph. More importantly, though, the system can return up to 48.7mpg on the WLTP combined cycle, while emitting just 131g/km of CO2.

The plug-in hybrid variant has a more powerful 90bhp electric motor and a larger 13.8kWh battery pack, which sees power rise to 261bhp – although the torque figure stays the same at 350Nm. However, due to the added weight of the bigger battery, the more powerful PHEV model is actually slower than the hybrid from 0–62mph, with a time of 8.6 seconds.

The trade-off is better fuel economy, lower emissions and a pure-electric driving range of 38 miles, which should be plenty enough for most morning commutes. Fuel economy is a claimed 201.8mpg, while emissions stand at just 31 g/km of CO2.

The two new powertrains join the Tucson N-Line’s existing range of pure combustion and mild-hybrid engines, all of which are also based on the same turbocharged 1.6-litre four-cylinder petrol unit.

The cheapest option, priced from £31,110, does without electrical assistance and produces 148bhp and 250Nm of torque. Hyundai says that’s enough for a top speed of 117mph and a 0–62mph time of 10.3 seconds. The engine is only available with the firm’s new Intelligent Manual Transmission, which uses a 48-volt electrical linkage for the clutch.

Hyundai does offer a seven-speed automatic option, but the upgrade also adds mild-hybrid assistance. Two outputs are available; there’s a 148bhp front-wheel drive variant which costs £33,275 and a 178bhp four-wheel drive model which is priced from £37,065.

The N-Line trim-level introduces a few sporty touches to the fourth-generation Tucson inside and out, turning the SUV into a direct rival for the Volkswagen Tiguan R-Line.

Inside, the sporty Tucson features the usual range of N Line tweaks, which includes an N-branded steering wheel, black headlining and a pair of sports seats trimmed in black suede and leather. The cabin makeover is completed with a set of aluminium pedals and unique treadplates.

There are a few options to choose from, too, including metallic paint and Hyundai’s Tech Pack which adds electronically controlled dampers, a 360-degree camera and a blind-spot camera feed. The latter option can only be fitted to the 180bhp Tucson N Line S.

What do you make of the new Hyundai Tucson N Line? Let us know in the comments section below…