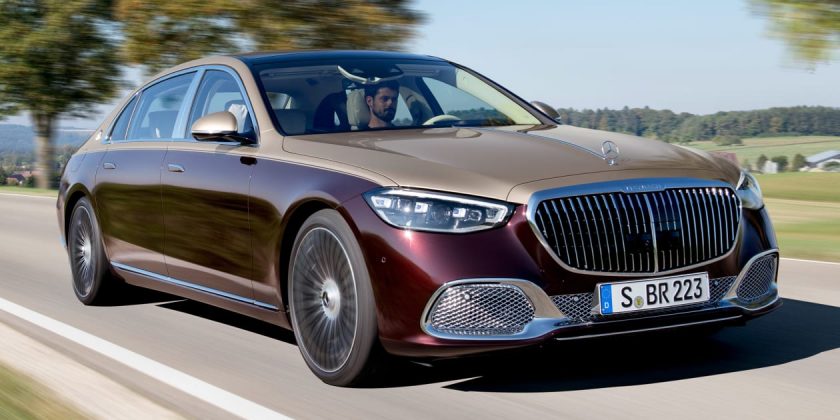 Mercedes has outlined the engine line-up for the all-new Maybach S-Class, with buyers able to choose from either a 4.0-litre V8 or a 6.0-litre V12, and with a plug-in hybrid option available later down the line.

The range opens with the S 580 4MATIC variant, powered by twin-turbocharged 4.0-litre V8 producing 496bhp and 700Nm of torque. It sends drive to all four wheels via a nine-speed automatic gearbox, linked to a 48-volt starter-generator for complete engine shut off coasting and seamless restarting.

The more expensive S 680 model is powered by a non-electrically assisted 6.0-litre V12, which produces 603bhp and 900Nm of torque. The extra grunt lowered the Maybach’s 0–62mph time to 4.5 seconds, although top speed remains the same at 155mph. It’s also connected to the same automatic gearbox and four-wheel drive system as the V8.

It’s also even more thirsty than the V8. Mercedes says it’ll return between 19.6 and 21.0mpg on the WLTP combined cycle. Emissions are rated between 305 and 322g/km, which is only slightly less than the Ferrari 812 Superfast.

Mercedes will also launch a plug-in hybrid version of the Maybach, based on the straight-six powertrain destined for the standard S-Class. Specifications for this option are yet to be confirmed but, in the Mercedes-badged S-Class, it’ll have a pure-electric range of 63 miles – a figure which will likely decrease for the heavier Maybach model.

Cosmetic revisions over the standard S-Class include a redesigned radiator grille, a new front bumper, fresh LED headlights and a tweaked rear-end with a more svelte diffuser and twin-exit exhaust system. As an optional extra, buyers can also spec Maybach’s trademark two-tone paint scheme, which is cut at the saloon’s waistline.

Like the outgoing model, the Maybach S-Class will be exclusively available as a long-wheelbase saloon. However, despite sharing the same basic underpinnings as the standard car, it’s a full 18cm longer than the extended wheelbase Mercedes S-Class. Maybach says this gives rear-seat passengers extra space to stretch out.

Maybach expects most of its customers will have their own chauffeur, rather than drive their cars themselves, so the cabin has been organised to suit. In the rear, there’s a pair of electrically adjustable and reclining chairs in place of the standard S-Class’s bench seat, both of which feature massaging leg-rests and footrests built into the floor.

There’s also a host of optional equipment to keep rear-seat passengers comfortable, such as adjustable LED spot lamps, gesture control and two 11.6-inch touchscreens, which allow the occupants to browse the internet or watch films.

Buyers can also spec a refrigerator, which is built into the rear armrest. It can be removed from the vehicle and can chill up to 10 litres of food and drinks to between 1 degrees and 7 degrees celsius. For a bit of added luxury, Maybach also sells a pair of optional silver-plated champagne goblets, which slot neatly into a cubby in the centre console.

Like the standard S-Class, Mercedes is planning to roll-out a conditionally autonomous driving mode for the Maybach in the second half of 2021, which promises to take the strain off the driver and allow them to browse the internet or check their emails using the car’s MBUX infotainment system.

The company’s new Drive Pilot system will be one of the world’s first Level 3 autonomous driving modes, which will be able to assume complete control of the Maybach’s steering, throttle and brakes on designated stretches of motorway without any intervention from the driver. Mercedes says the system will also be able to react to events such as speed limit changes and accidents completely independently.

The driver is constantly monitored using the car’s on-board cameras, and if they seem unresponsive, or spend too much time looking into the rear of the vehicle, the system will pull the car over to the side of the road in a controlled manner and call the local emergency services.

The Maybach’s tech-fest continues with an active road noise compensation system, which works in tandem with the car’s premium Burmester stereo system. It’s similar to noise-cancelling technology on a pair of high-end headphones, with microphones in the cabin picking up low-frequency background noise and feeding a counter-phase version of the sound waves through the car’s speakers.

As an optional extra, buyers can also spec Mercedes’s MBUX interior assist – a system which uses a series of cameras mounted in the roof to recognise the passengers’ eye movements, hand gestures and body language to perform certain interior functions. For example, if a rear-seat passenger reaches for the seat belt, the system will recognise the movement and automatically extend the belt into their hands.

What does the new Mercedes-Maybach S-Class have to beat? Check out our review of the Bentley Flying Spur here…