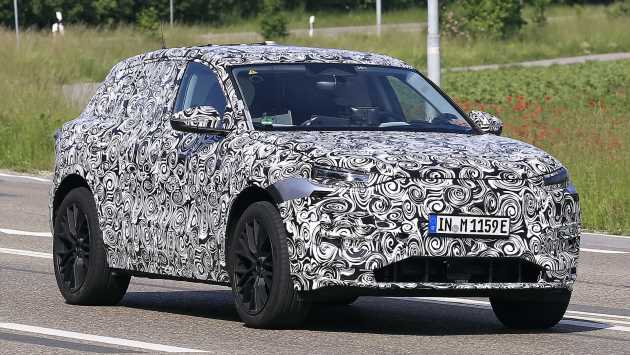 The new Audi Q6 e-tron will make its debut in 2022, taking the number of pure-electric models on the German brand’s fleet to four

Our spy photographers have caught the new Audi Q6 e-tron on camera ahead of its anticipated arrival in 2022. The German brand’s latest electric SUV will make its debut next year, sharing the same platform as the next-generation Porsche Macan.

From these images of a heavily disguised prototype we can see that the Audi Q6 e-tron’s design language will draw plenty of influence from the e-tron GT four-door coupe. The SUV’s radiator grille and headlamps appear to be a similar shape to the saloon’s, and there’s a similar full-width LED light-bar across the car’s tailgate.

In profile, the Q6 e-tron looks like a scaled-up version of the Q4 e-tron, sharing the same sloping roofline, tailgate spoiler and square tail, though the Q6’s bonnet appears a little longer.

Inside, the car is likely to adopt the new 11.6-inch central touchscreen used in the Q4 e-tron, which is the largest display ever fitted to a production Audi. The interior design is likely to differ from the smaller MEB platformed Q4 e-tron, however, owing to the use of the new Premium Platform Electric (PPE) platform.

The Q6 e-tron will be the first Audi based on the Volkswagen Group’s new PPE architecture, which is being jointly developed by Audi and Porsche. It’ll also be one of more than 20 electric cars the brand will launch by 2025, as the brand targets for one third of its sales to come from EVs by the middle of the decade.

The PPE platform will have an 800-volt electrical architecture, which means it will be capable of providing DC rapid charging at up to 350kW. A range of more than 300 miles should also be achievable, as PPE is an evolution of the J1 platform found under the Audi e-tron GT, which has a minimum WLTP range of 298 miles.

That car’s 469bhp (or 523bhp with overboost engaged) four-wheel drive powertrain would likely find its way into the cheapest Q6 e-tron. There’s also room in the line-up for a more performance-focussed RS-badged variant, which would probably use the same 636bhp powertrain as the RS e-tron GT.

The Q6 e-tron will go into production at Audi’s Ingolstadt factory next year, which the brand is converting to an all-electric assembly line, removing the existing equipment that produces the brand’s A3 family hatch and replacing it with production facilities to accommodate the PPE platform.

This also includes the development of an in-house battery assembly facility “in the direct vicinity of car assembly,” according to Duessman.

Following the Q6 e-tron, Audi confirmed that its first “Project Artemis” model will launch in 2024. The car will be aimed at the luxury sector, spearheading Audi’s development of future electronic vehicle architecture, technology and operating systems.

Audi also recently teased the Grand Sphere concept, which previews an A8-replacing luxury limo that will be introduced in 2025. It’s likely to be the centrepiece of Audi’s stand at this year’s Munich Motor Show.