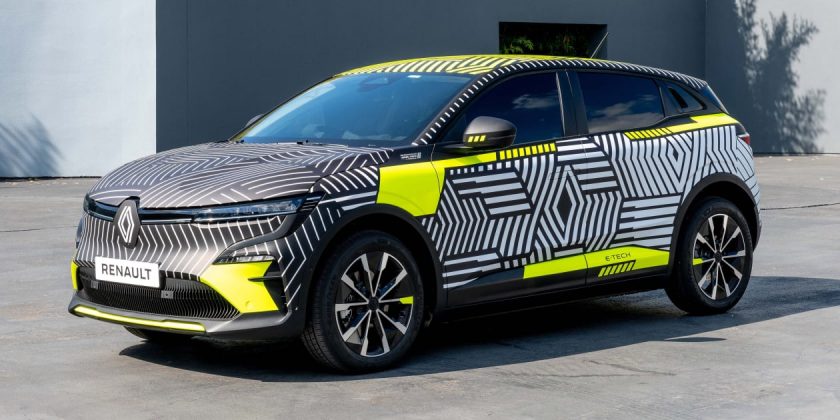 Electric Renault Megane E-Tech is going through its development phase, with these teasers offering a first official look at the car’s styling

Renault has released the first official images of the new Megane E-Tech Electric SUV. This camouflaged development car offers our best look yet at the new model’s styling, which will borrow elements of the Megane hatchback’s design and morph them into a crossover body, similar in size to the Captur.

The reinvented Renault Megane will open a new chapter for the French brand with former SEAT boss Luca De Meo now in charge. The firm’s plan, dubbed “Renaulution”, will see Renault launch seven new all-electric vehicles by 2025, with this Megane EV crossover the first of the bunch.

Renault’s new Megane E-Tech Electric is based on the Renault-Nissan Group’s CMF-EV platform, which is shared with the Nissan Ariya SUV. Like its chassis sibling, the Megane E-Tech will have a 60kWh battery pack and a 215bhp electric motor to provide a maximum range of up to 280 miles.

The motor will also provide a healthy 300Nm of torque, while De Meo has previously promised a 0-62mph time of less than eight seconds. He also said that Renault could look to develop a longer-range version of the car in the future.

Renault previewed its new EV last year with the Megane E-Vision concept, although these new images show that some of its features will be toned down for the production model. The suspension has been raised, the rear light bar has been tweaked and the enormous alloy wheels have been swapped for smaller production-friendly alternatives.

However, the rest of this early car’s styling remains faithful to the concept. Under the cladding we can spot the same blade intakes on the front bumper, as well as the French brand’s trademark C-shaped daytime running lights. There’s also the same kick in the waistline towards the crossover’s C-pillar, while the latest version of the Renault badge features as well.

Given the design similarities, the finished Megane E-Tech Electric’s dimensions should be very close to the concept’s, at 4,210mm long, 1,800mm wide and 1,505mm tall. That’ll give it a comparable footprint to the Captur crossover, but with a lower roofline.

De Meo hailed the concept as “a masterpiece of packaging.” The car’s wheels are pushed out to the corners of the body to maximise interior space, offering a similar level of room to larger family hatchbacks with exterior dimensions similar to that of the current Megane.

The floor appears to be very shallow for an EV, too – no surprise, given that Renault promises that the Megane EV will use the slimmest battery pack on the market, at just 110mm deep.

Renault also previously teased the new car’s interior, which will feature a brand-new L-shaped infotainment system. The set-up comprises a large portrait infotainment system, which links into a wide digital instrument cluster, and thanks to the lack of a transmission tunnel, there’s space beneath the screen for a little extra storage.

Elsewhere on the technology front, an on-board charger will allow 7kW charging from a wallbox, with more advanced AC three-phase compatibility, too. However, the only charge time Renault has revealed so far is that the electric Megane will be able to reclaim 124 miles of range in 30 minutes when rapid charging at its maximum of 130kW DC.

We believe the Megane will be revealed this summer before going on sale in Europe before the end of the year, but it’s unlikely to be on British roads until 2022. Expect a starting price of between £35,000 and £40,000.

There’ll be several Renault-badged EVs following on from the Megane E-Tech Electric, too. De Meo said: “Like with the first generation of Megane, this Megane with an E is just the beginning. A whole family of vehicles will be based on our CMF-EV platform.”

However, Renault is more likely to make a range of separate models, rather than a cluster of EVs all under the Megane banner.

What does the new Renault Megane E-Tech Electric have to beat? Check out our top 10 list of the best electric cars on sale…