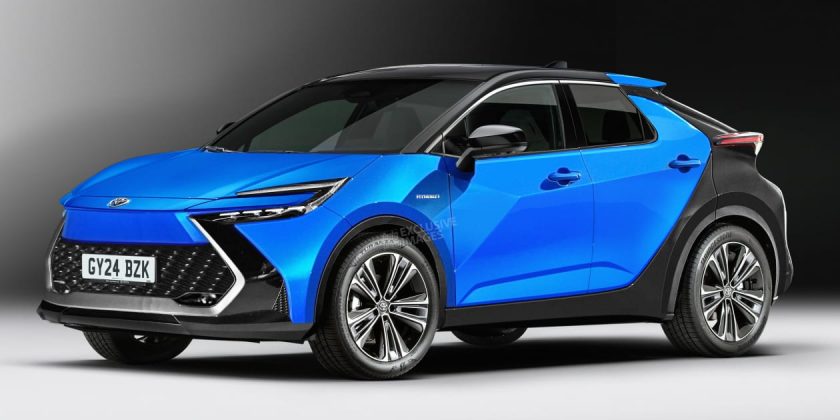 The second generation Toyota C-HR will feature combustion, plug-in and possibly electric power, and our exclusive images preview how it could look

Toyota is pushing ahead with its range of bZ fully electric vehicles, but the firm is also preparing to extend the life of one of its most popular combustion-engined models when a fresh generation of C-HR arrives in the second half of next year.

Designed and engineered in Europe, the style-focused SUV-crossover has been a smash hit with customers worldwide since it was introduced in 2016. And even with Toyota targeting 3.5 million global sales of electric vehicles annually by 2030, there’s still plenty of space in its portfolio for cars featuring combustion power.

One of the current C-HR’s biggest selling points has been its polarising styling, with complex surfacing and a narrow glasshouse, particularly at its ‘pinched’ rear end.

Our exclusive images – based on leaked patent images from Australia that Toyota sources won’t comment on  –  show that the firm is building on the original look, with lots of creases along the car’s flanks and, most noticeably, a contrast-colour C-pillar section that follows the styling of the Aygo X city car.

The front takes cues from many of the concepts revealed at Toyota’s EV showcase at the end of 2021, while the dramatic roof profile looks similar to the current car’s – a sign that Toyota isn’t targeting huge gains in practicality, even in the relatively cramped rear cabin. The firm has the Corolla Cross and RAV4 to cater for customers after a more traditional SUV, so it doesn’t need to take the C-HR in that direction. If anything, its wheelbase looks slightly reduced compared with the current car’s, so it could be that Toyota is going to make the new C-HR more of a coupé sibling to the Yaris Cross.

There remains scope for a more radical plan, though. Late last year Toyota sources confirmed a new platform, called E3, that will mix elements from the combustion-engined and electric-only versions of its TNGA architecture. The C-HR has already been highlighted as a likely candidate for the new underpinnings, which are designed to give Toyota the flexibility to offer hybrid, plug-in hybrid and pure-electric versions of single models, as well as making them on the same production lines.

The timings would be tight – most sources suggest E3 won’t come on stream until the middle of the decade – but Toyota could conceivably use it to offer a new C-HR with various levels of electrified powertrain, and an all-electric version of the same model that could carry the bZ (Beyond Zero) badge.

Even if the Mk2 C-HR sticks with its current TNGA platform, expect major revisions in the combustion-engined powertrains as the engineers bring the model up to the latest iterations of hardware and software. The existing C-HR uses the fourth generation of Toyota’s hybrid powertrain, which has been superseded in Japanese-market models and the recently updated Corolla.

But a further evolution of this latest set-up could well be available for the C-HR, after making a likely debut in the spring in a new Prius. That purely eco-focused model remains a halo vehicle for Toyota’s hybrid efforts, so it’s a natural launchpad for a fresh generation of systems. Expect a focus on making the complex transmission of the C-HR feel more natural, and increasing the amount of time spent running on pure electric, particularly around town.

The more compact systems and a more energy-dense lithium-ion battery may even allow Toyota to offer the C-HR as a plug-in, utilising software and some hardware from the RAV4, but steering clear of that car’s sports car-esque power and performance. The patent images show flaps on both of the rear wings, suggesting a fuel filler and a plug socket. But even if a C-HR PHEV does get an additional electric motor on its back axle, like the RAV4, it is likely to be of a more modest output, tailored to maximise the pure-electric range that’s crucial for tax regulations around the world.

Toyota may have accelerated its EV plans, but its approach to zero-emissions vehicles remains more multi-faceted and transitional. Toyota’s boss Akio Toyoda told dealers in the US last week that shifting higher volumes of hybrids could, for the time being, be a more effective way of reducing CO2 emissions than limited numbers of expensive EVs. “Toyota can produce eight 40-mile plug-in hybrids for every one 320-mile battery electric vehicle,” Toyoda said, “and save up to eight times the carbon emitted into the atmosphere.”